As much jabbering as I do here about myself, there are probably still one or two things you don’t know about me.

Here’s one: when I was little I was a Brownie, and then I “flew up” to become a Junior Girl Scout, and then, after the novelty of wearing my uniform and sash with badges to school once a week on meeting days wore off, I gave all that up. I’m not really a joiner.

When I first became a Brownie, the thing that interested me most about the whole affair was the manual. It was a square, orange-colored, soft-covered reference book that contained all you needed to know about being a good Brownie: the uniform details, how to wear the sash, the story of how the Brownies came to be, a comprehensive list of all the badges you could earn, the pledges you would recite, the behavior expected of you at meetings and in your community, the songs you would need to memorize, the suggested games and activities for Brownie meetings.

As I remember it, near the back of the book (but it could have been anywhere), there were sketches of Girl Scouts in their uniforms. The dimple-faced Brownie in her brown outfit, the Junior in her green. As you progressed through the evolution from Brownie to Senior, the uniforms (always a dress or a skirt, mind you, back in those days) got more elegant to my mind. The older girls wore cute berets worn slightly askew…. and white gloves. I gave serious consideration to whether I could tough it out long enough to get to white glove stage. Then I thought better of it and went back to my blue jeans and model horses.

I spent a lot of time in that book. More time, in fact, than I spent at meetings or activities. I didn’t much enjoy the activities, but, even back then, grade 2 or 3, I really dug a reference book.

Why am I telling you this?

Well, today starts National Poetry Month and though I agree with Mary Ruefle that November could use more poetic attention, I don’t see any reason why we shouldn’t cram the year with a much poetry as possible, so why not celebrate poetry in April? This year, as in past years, I’ll mark the occasion by adding a new poem to this post every day for the month.

On top of that, I’m going back to scouting. Poetry scouting, that is. I’ll be participating in the Found Poetry Review’s  PoMoSco project, where I and 212 other poetry scouts (representing 43 states and 12 countries) will be creating and posting a new found poem every day for the month of April.

Each day there’s a new type of found poetry to compose, a new badge to earn. Through March, I’ve been preparing by gathering source texts and writing some first drafts, but today is when it all becomes real.

I just saw two boys.
One of them gets paid for distributing circulars
and he throws it down the sewer.

I said, Are you a Boy Scout?
He said, no.
The other one was.
I have implicit faith in
the Boy Scouts

Go marry! your son will have
blue eyes and still
there’ll be no answer
you have not found a cure
No more have I for that enormous
wedged flower, my mind
miraculously upon
the dead stick of night

That’s a bonus poem for you.

From now on, I’ll be adding a link each day to a poem that somehow relates to the day’s PoMoSco badge category (in parentheses). I hope you’ll also visit us over on the PoMoSco site to see our poems there. (If you want to see the poems I’m writing, you can get there by using this direct link.)

April 1 (Pick and Mix) ~ Pick ‘n’ Mix , by Holly Magill
April 2 (Shake it Up) ~ Back Yard, by Carl Sandburg
April 3 (White Out) ~ Departure and Departure and…, by George Bruce
April 4 (On Demand) ~ The Grind, by Ange Mlinko
April 5 (All Ears) ~ LXI, by César Vallejo
April 6 (First in Line) ~ Louisiana Line, by Betty Adcock
April 7 (Roll the Dice) ~ Here, by Arthur Sze
April 8 (Redacted) ~ a little bit of poetry, by tychogirl
April 9 (X:Y) ~ X Minus X, by Kenneth Fearing
April 10 (Interloper) ~ The Interloper, by Thomas Hardy
April 11 (Haiku Anew) ~ Not That It’s Loneliness, by Chloe Moorish
April 12 (Chance Walk) ~ A Late Walk, by Robert Frost
April 13 (Picture It) ~ Picture of Little Letters, by John Koethe
April 14 (Survey Says) ~ Phone Survey, by Carole Langille
April 15 (As Advertised) ~ The Letter, by Dana Gioia
April 16 (Blender) ~ Miniature Delights, by Anne Ryland
April 17 (Spelling B) ~ I Wave Good-bye When Butter Flies, by Jack Prelutsky
April 18 (Open Book) ~ Granted, by Maxine Chernoff
April 19 (Quiet on Set) ~ Passing Through, by D.A. Powell
April 20 (Off the Shelf) ~ Canada, by Billy Collins
April 21 (Interrogator) ~ The Wrong Question, by Anne Swannell
April 22 (Dialed In) ~ The Farm on the Great Plains, by William E. Stafford
April 23 (Click Trick) ~ The South Transept Window, St. Lucia at Lowhampton, by Martin Monahan
April 24 (Best Laid Plan) ~ To a Mouse, by Robert Burns
April 25 (Crowdsource) ~ Out of the Rolling Ocean, the Crowd, by Walt Whitman
April 26 (Pinch an Inch) ~ The Sciences Sing a Lullabye, by Albert Goldbarth
April 27 (Spaced Out) ~ Theories of Time and Space, by Natasha Trethewey
April 28 (Cut it Out) ~ Cut Out For It, by Kay Ryan
April 29 (Substitute Texter) ~ The Steam Engine, by Elizabeth Wills
April 30 (Order’s Up) ~ Paris – Forfar, by David Kinloch 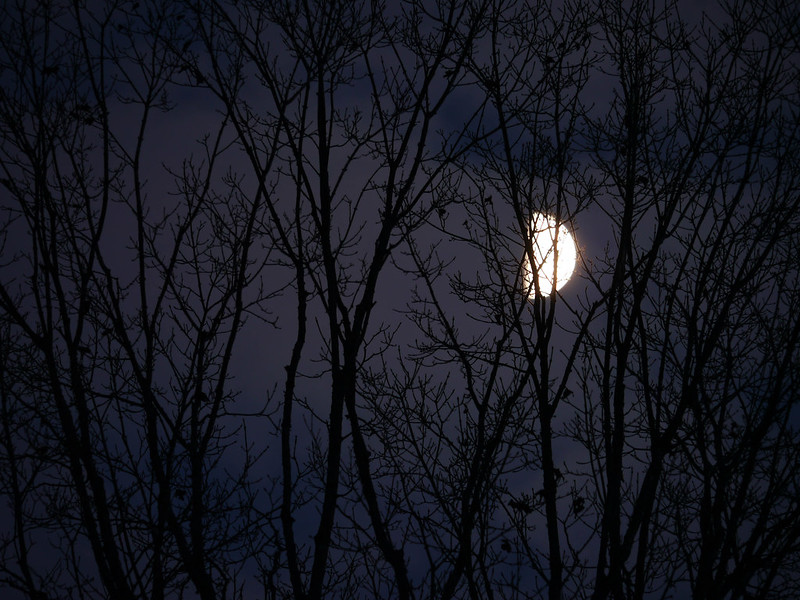 Earlier this evening I spied on the moon through the branches of the huge Maple tree in our yard. Now, when I’m here at my desk, wondering what on earth to write about, the moon is spying on me (M told me so just a minute ago).

What can I possibly write that the moon hasn’t already read?

What can I do but describe the cold blue-black night, the dying glow of the fires, the dogs lying like moored boats in a moonlit harbor, another load of dirty dishes piled in the sink, the stereo playing some piece of music I feel I know but can’t name, the moon sailing her orbit while we sail ours, the end of the day.

Same old story, says the moon in a comforting way. Time to turn out the lights, pull the night up to your chin, feel quiet and planted, like a Maple tree on a November night.

All the complicated details
of the attiring and
the disattiring are completed!
A liquid moon
moves gently among
the long branches.
Thus having prepared their buds
against a sure winter
the wise trees
stand sleeping in the cold.