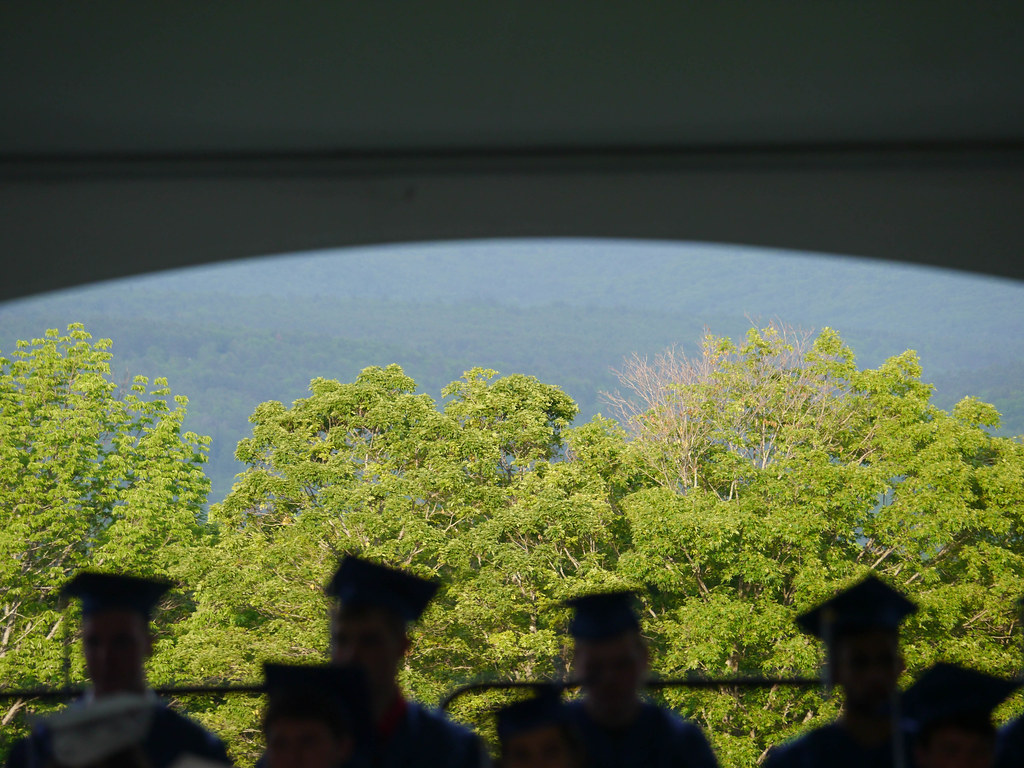 Five days later and I still can’t think about Friday without emotion.

It was a long day of ceremony, starting at 8 in the morning with a whole-school awards ceremony followed by Senior Class Day, where my resolve not to cry began to unstitch the moment I heard the first notes of music in the senior slideshow that H and Reshma put together. 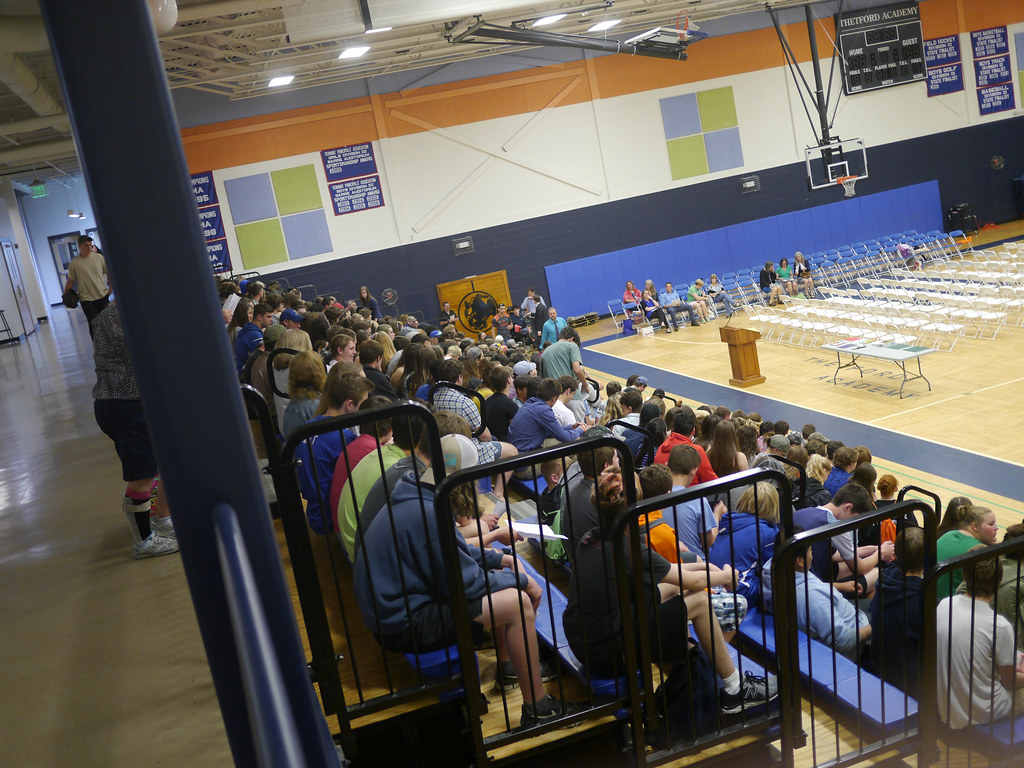 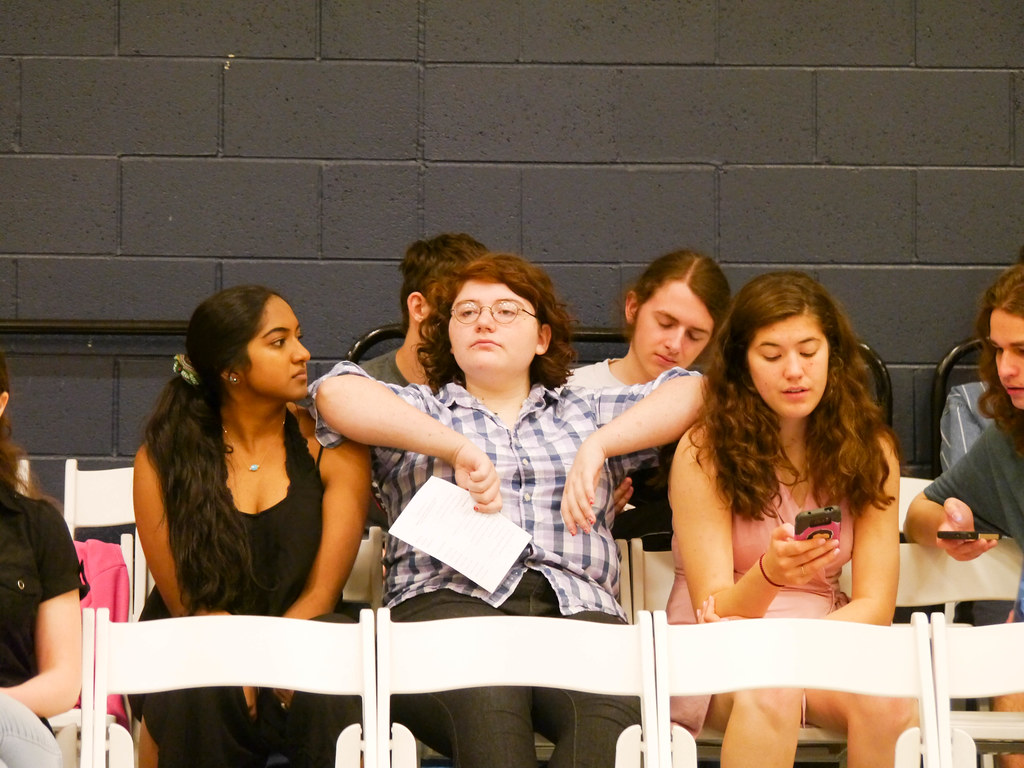 I’m quite sure I had tears in my eyes or on my cheeks from that moment until I sighed myself into bed that night.

Through the awards, the class will, the tributes to classmates and teachers.

Through the grey day that threatened rain in the morning but promised sun in the evening. 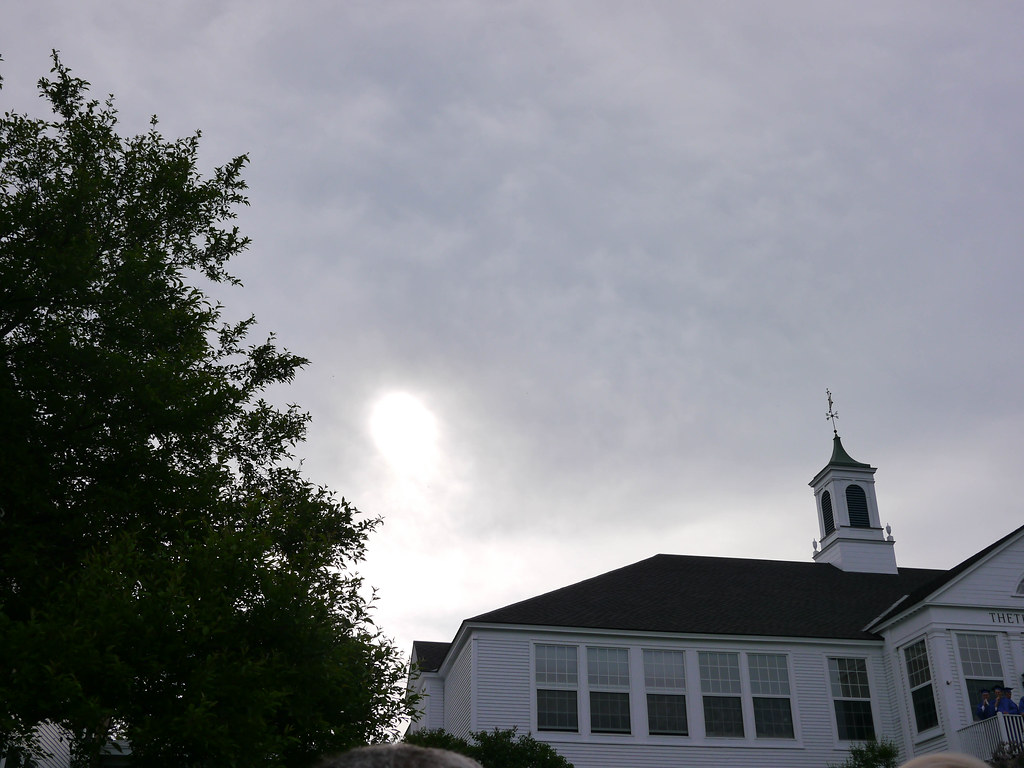 Through the parade of gowned students. 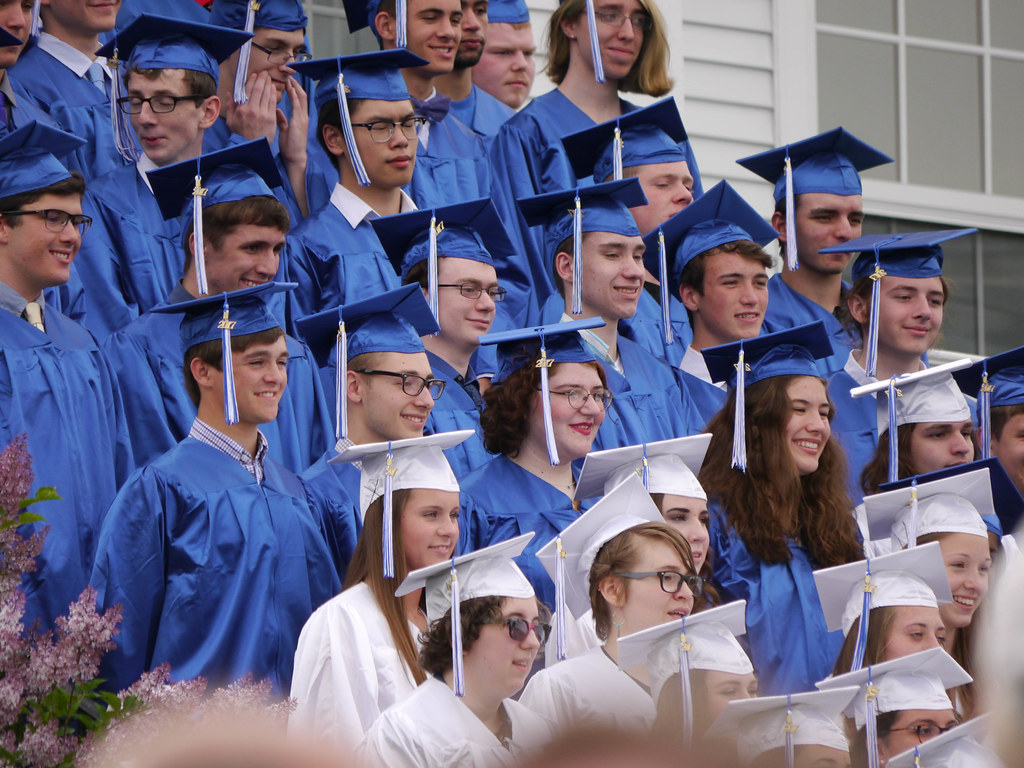 Through the birds flying overhead like some familiar metaphor. 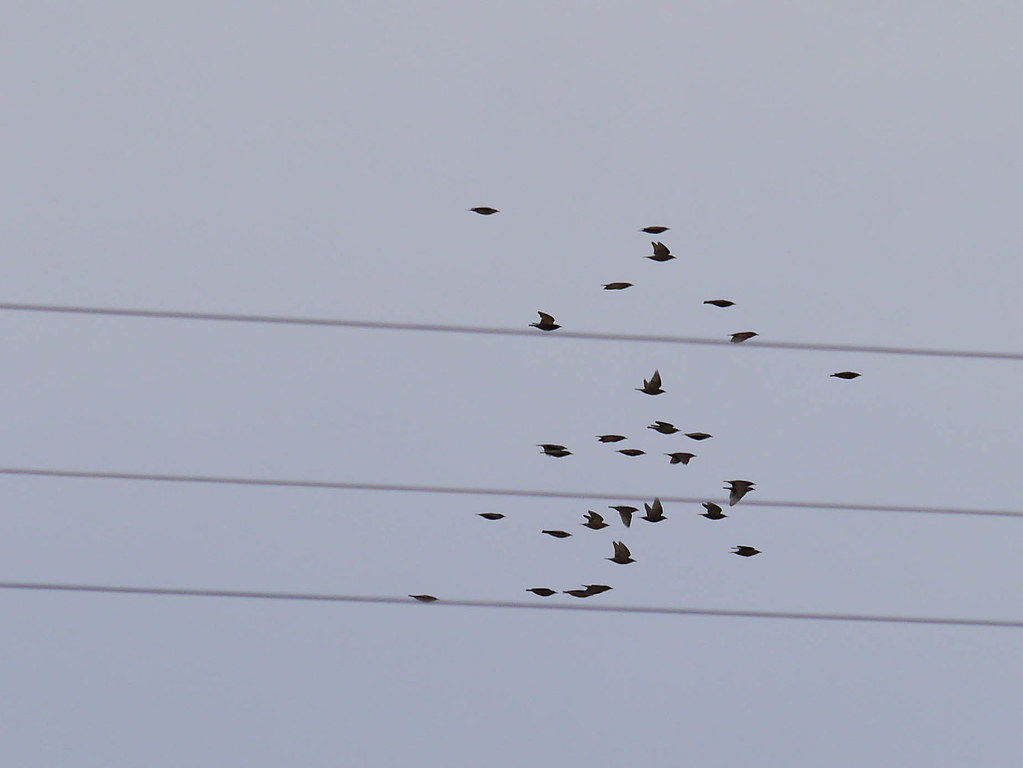 Through the flower ceremony, when Reshma surprised us. 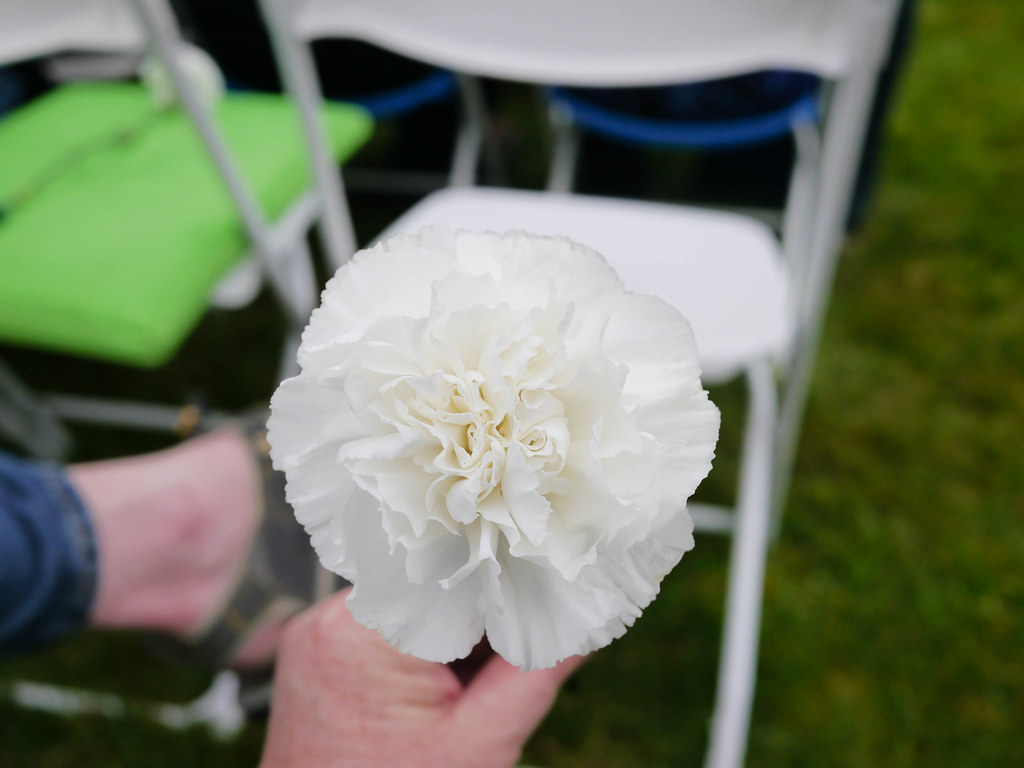 Through the special awards, when the school surprised us. 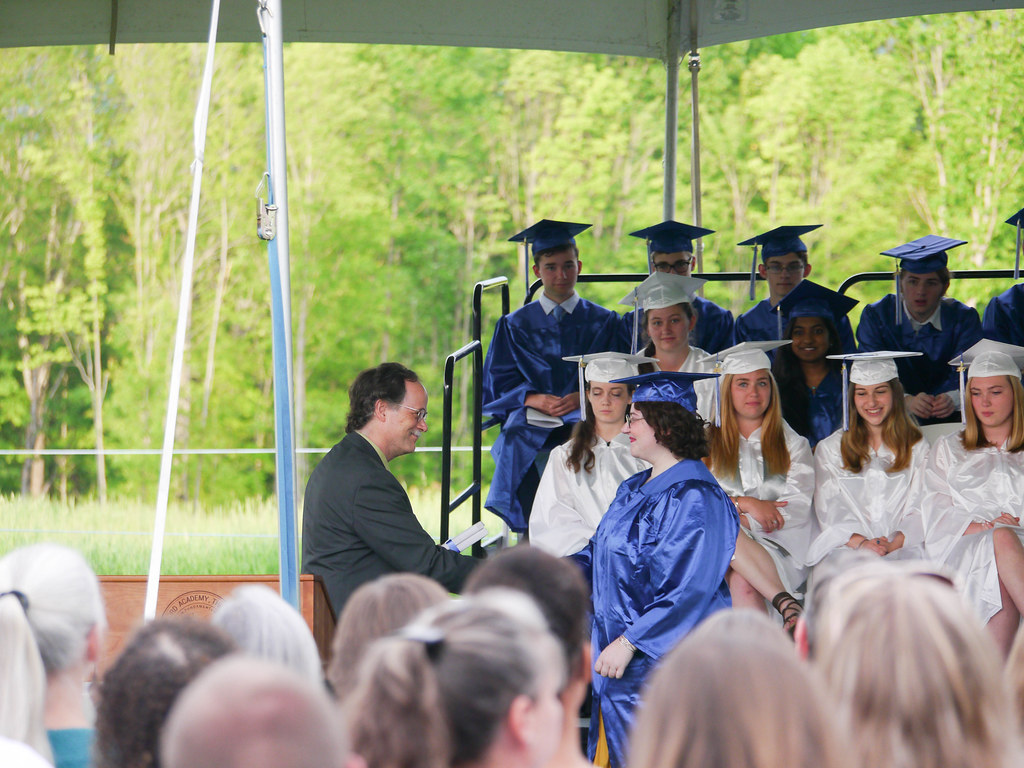 Through a perfect song. 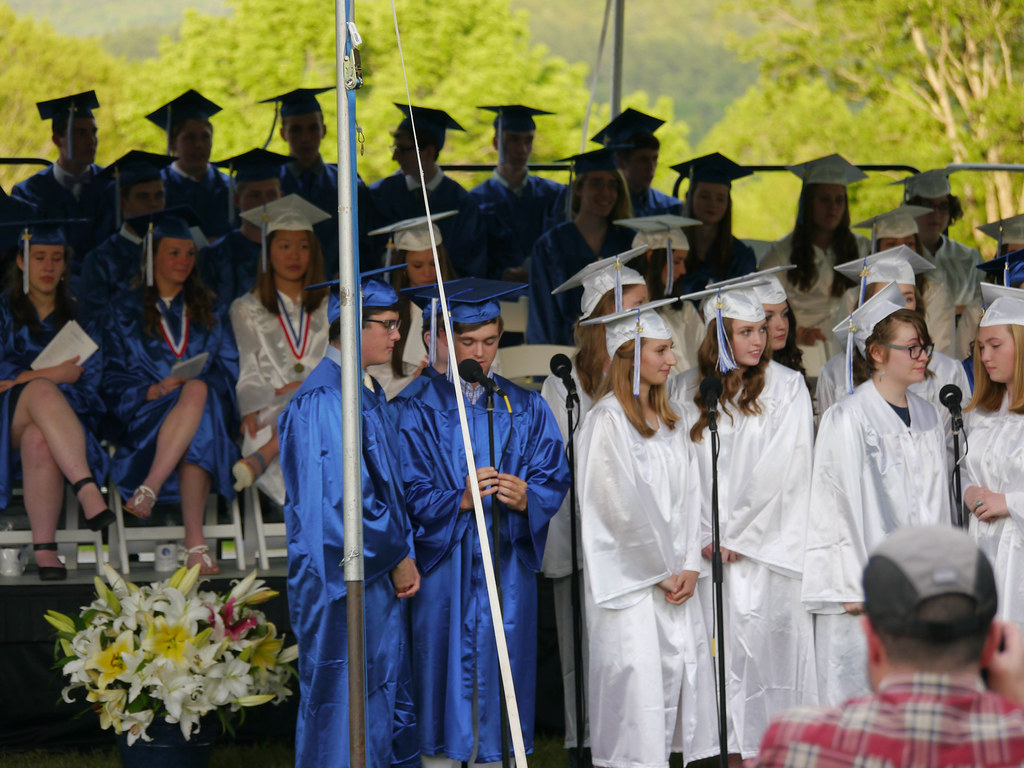 Through the moment we had come for but still were somehow not prepared for. 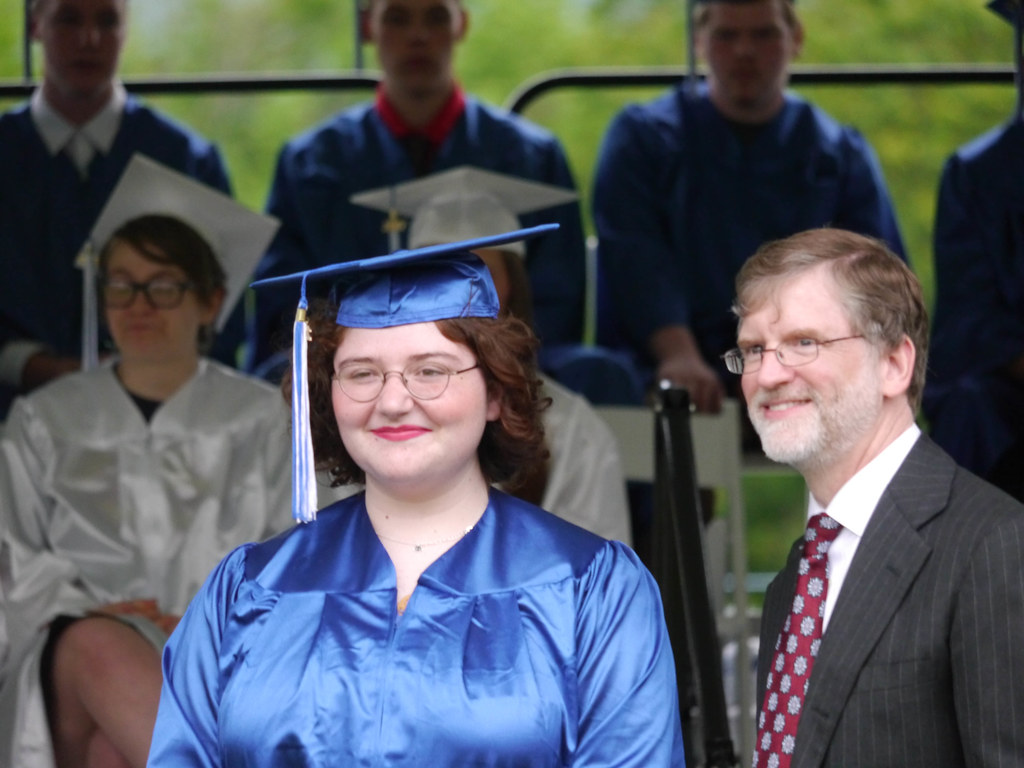 Though the view of the mountains and the sun bouncing off the ragged clouds. And the people who love H there to celebrate together. And the white tent on a hill in front of the school we all called home for the last six years. And the full moon steadying itself to rise.

It was a day that “marked the edge / of one of many circles.” Circles of H’s life, looping over each other, opening out to the next. Circles of our lives, once centered together and now beginning to drift, still overlapping, but no longer entirely concentric with hers.

It was a day of crows calling out and the gentlest raindrops and the hidden movement of stars overhead. The ending of one thing and the beginning of so much more, I can hardly catch my breath.

p.s. You can see all the photos I took during class day and graduation here.

Every time the bucks went clattering
Over Oklahoma
A firecat bristled in the way.

Wherever they went,
They went clattering,
Until they swerved
In a swift, circular line
To the right,
Because of the firecat.

Or until they swerved
In a swift, circular line
To the left,
Because of the firecat.

The bucks clattered.
The firecat went leaping,
To the right, to the left,
And
Bristled in the way.

Later, the firecat closed his bright eyes
And slept.

One must have a mind of winter
To regard the frost and the boughs
Of the pine-trees crusted with snow;

And have been cold a long time
To behold the junipers shagged with ice,
The spruces rough in the distant glitter

For the listener, who listens in the snow,
And, nothing himself, beholds
Nothing that is not there and the nothing that is.

Tea at the Palaz of Hoon

Not less because in purple I descended
The western day through what you called
The loneliest air, not less was I myself.

What was the ointment sprinkled on my beard?
What were the hymns that buzzed beside my ears?
What was the sea whose tide swept through me there?

Out of my mind the golden ointment rained,
And my ears made the blowing hymns they heard.
I was myself the compass of that sea:

I was the world in which I walked, and what I saw
Or heard or felt came not but from myself;
And there I found myself more truly and more strange.

I’ve been thinking about Wallace Steven’s poem, The Snow Man, for weeks now, because, of course, it’s winter and it’s January.

I wanted to write something about having a “mind of winter”, expecting to have experienced it, even for just a day, as I have in winters before.

But this January’s rickrack weather hasn’t cooperated. It’s too ragged and unpredictable for me to have relaxed into the rhythm of ice and snow, the logs being fed methodically into the wood stove, the shovel scraping the driveway, the sliding of one ski past the other on the trail, the shuffling of snowshoes up and over the snow-plowed mound at the end of the driveway.

Instead, we’ve swung from -25 degrees one day to +50 degrees another, from snow to rain to ice to sun and blue skies, from sequin-scattered snow to squeaky styro-foam snow to fog, slush, mush, mud.

How can I settle into that mesmeration of cold, still resilience, with all of this meteorological commotion?

As much as I resent the oncoming of winter (I have a mind of spring), there’s something to be said for that band of weeks against which you can do nothing but read, sit by the fire, make soup and bread, and be excused up to bed early just because it’s dark by 4.30.

The yard and garden are silent. The animals understand if you don’t want to play outside; they’re in hunker-down mode, too. You’re vaguely aware of plans that need or ought to be made, for some future time when the cold is cracked open and seedlings sprout, but… not yet. Not yet.

Tonight, just pull the covers up to your chin, listen to the wind roar, watch the flakes flutter down.

I’m greedy for that mental state: the whirling world putting a kind hand on my shoulder, telling me that nothing at all is required.

The wind is whistling across the yard now and the temperature is dropping again.

The wind slammed the barn door hard this morning when I was inside loading hay into the feeders. The goats were munching gently and they didn’t seem bothered by the wind and the noise. All they were interested in was the hay, and the animal crackers in the cookie jar, and a good rub against their foreheads.

It was warm enough this morning that I lingered there, jealous of the cozy barn and their herdness, and grateful for the way they welcome me into that herd though I’m clearly not a normal goat. And while I was there, I lost for a bit that mental list of things to do, or what was outside, or what was coming in an hour, or where I had failed or what I had meant to do and be.

That moment, and the true locked-down January, are like the hours of travel from here to there, when the only point is the movement. Nothing else is required. Nothing.