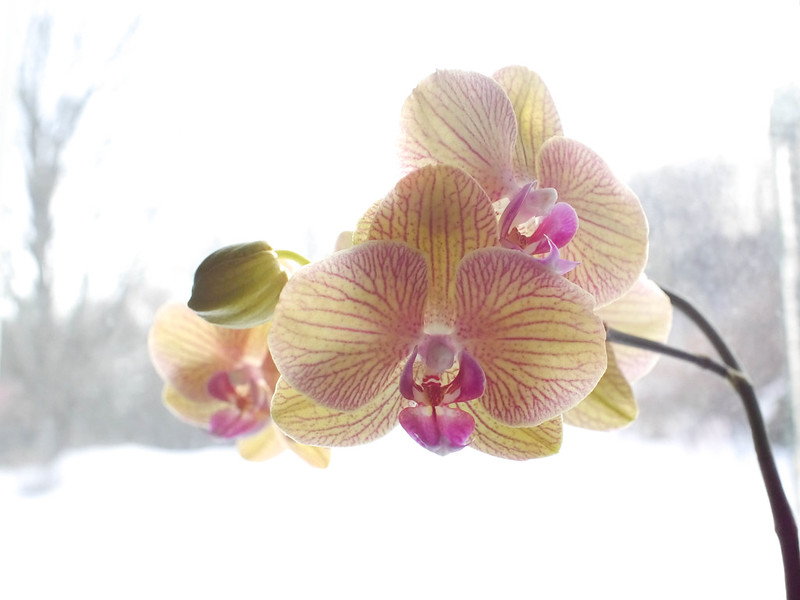 I really wanted to talk to you today—about nothing in particular—and this seems the best way. Or the only way. If I don’t want to make the dog nervous by talking out loud, that is.

(Mom, everything makes this poor dog nervous! He’s a bundle of shivers if you take the packing tape gun out the drawer. If he senses you’re even thinking about using a tool of any sort—this includes the tape measure—he books it for the stairs. Sometimes he’ll just be standing near me, teeth chattering, all wound up, even though nothing at all is happening and my hand is on his shoulder trying to reassure him. Right now he’s not nervous. Right now he’s flat asleep in a puddle of sunshine on the brown sofa, half on/half off his blanket, one jowl dropping open in a way that’s a bit disgusting and a bit interesting and I’m sure will result in a wet spot on the sofa. I don’t dare wake him.)

And I’m tired of talking in my head.

Anyway. I drove H to school this morning because M and I made a (advantageous to me) bargain: I’d do the school drop off and he’d do the goat chores (he got the 5º F and the ice-crusted walk between the house and barn, and I got the heated seats in the car and the company of our daughter; sounded fair to me). It was a quiet drive, still mostly dark and at least one of us still mostly asleep.

(About then I was thinking about my own middle and high school bus adventures—getting off at the wrong stop my very first day, waiting at the stop in the cold, hoping the mean girls wouldn’t skip the bus—and about those rare, glorious mornings when you didn’t have to be at work early and you’d offer me a ride to school. Did we talk about anything, or did I give you the teenaged cold shoulder? I remember my feeling of relief at catching a ride with you, but now I think I probably never told you how big a deal it was to me. I’m sure I didn’t.)

Usually, H has us plugged into some music from her iPod on the drive, but I took the aux cord out of the car in case we needed it for the drive to Michigan and haven’t put it back, so we had the lousy radio on instead (you know I love the radio, but this town has, maybe, four decent stations) and tuned to the oldies station and we caught the last couple of minutes of Holly Holy and boy did that make me smile. It felt like something magic I’d done myself, conjuring up that song just for you today. And then I realized, well, maybe you conjured it for me? Neat trick.

I read a book the other day that I would have passed to you if I could. It’s called Kitchens of the Great Midwest, and, though it was recommended by someone I trust as one of the best books of 2015, I really don’t think it was. Still, it had its moments and seemed like the sort of book you might enjoy and I was thinking if you read it, too, then we could talk about it and the parts that worked and the parts that didn’t. I think you would have liked the main character, Eva.

(Ooops. I think I just said that last part out loud because the dog woke up, gave me a sidelong, worried glance, and slunk off the sofa. Sofa? Or couch? I grew up saying “couch.” When did I adopt “sofa”? Chesterfield. I never really said that one, but that’s the one I love most. Oh! Did you know that H says “aunt” as “awnt,” like a true New Englander? I find myself changing my “ant” pronunciation when I’m around her.)

Recently, Dad and I were talking about real books (I mean, versus digital, e-books) and he said that the shelf in your bedroom where you and he lined up your to-be-read books was still there, with the same books you two put there all those years ago. One of those things that lingers, I guess. I asked for a photo of the books on that shelf, just to see what you had planned to read next, but it was all thrillers and mysteries, Mom, not a single Margaret Atwood. Sheesh. If I had sent you Kitchens, what would you have sent in return? Patricia Cornwell?

(You know I’m saying that with a smile, right?)

Did I ever tell you that I bought myself an orchid? This was two Octobers ago, when I felt the pressure of winter weighing on me and I spotted this plant at the co-op and I thought it looked cheery. I’d always heard that orchids were picky plants and I couldn’t imagine one thriving in a drafty, old, wood-heated farmhouse, but he (yes, he) has kind of astonished me. He won’t stop blooming. I keep meaning to ask you about this, seeing as how you were the one with the green thumb and had a special affinity for orchids. I keep meaning to ask you how something can keep blooming in spite of the dark and cold.

p.s. I meant to say also that I read a poem today that I really loved, for both its content and its form, the fact that it’s engraved on a bench in that city we love, on the northeast corner of Dufferin and Bloor.

Walking here, I turned my face to you and said,
how on earth will we live, who will dance with us,
will there be music? And you said, sure,
the usual birds will sing, the usual hours will pass at night,
and I asked you, will there be fame?
And you said, sure, but only between us.
It will be spring, forsythia will follow us and
we will hear the lake breathe.
Waiting then, I felt the world coming toward me.