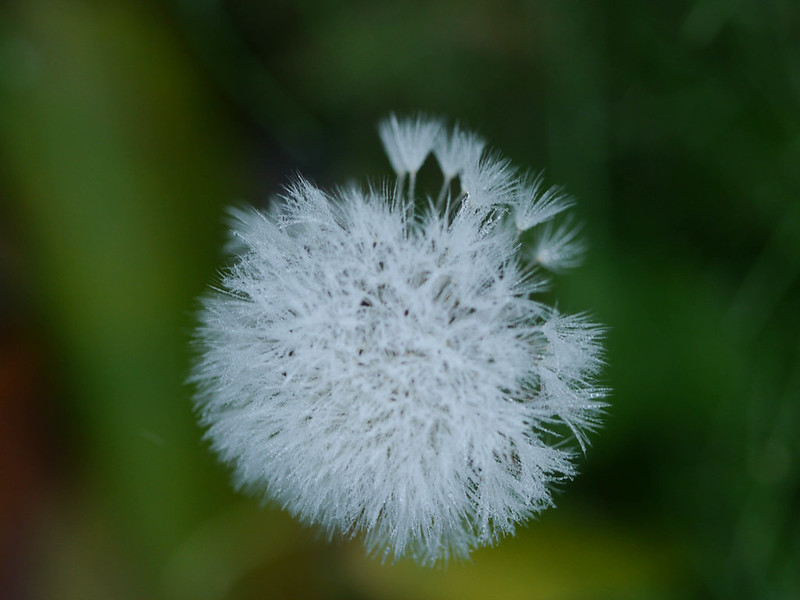 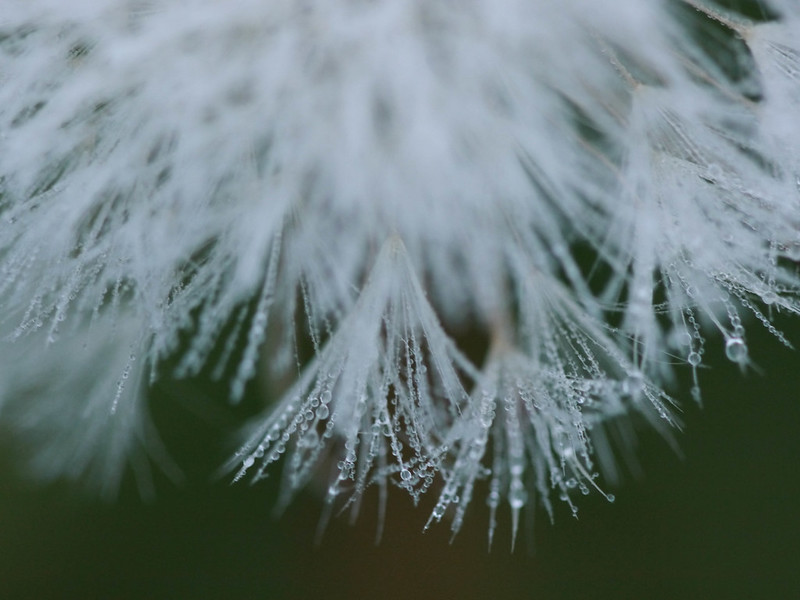 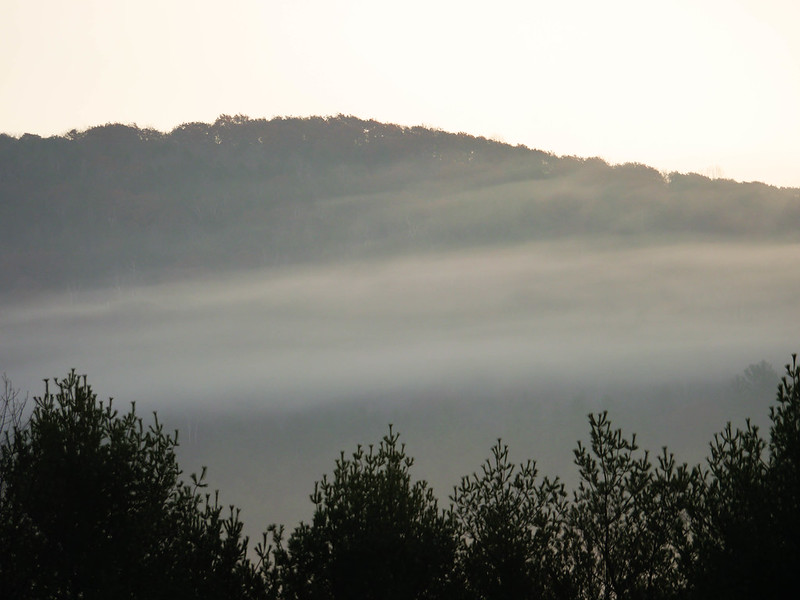 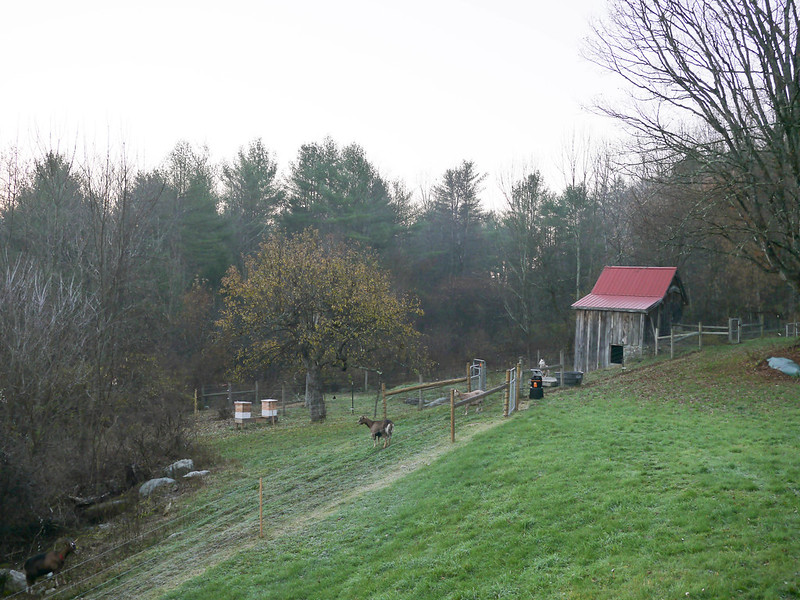 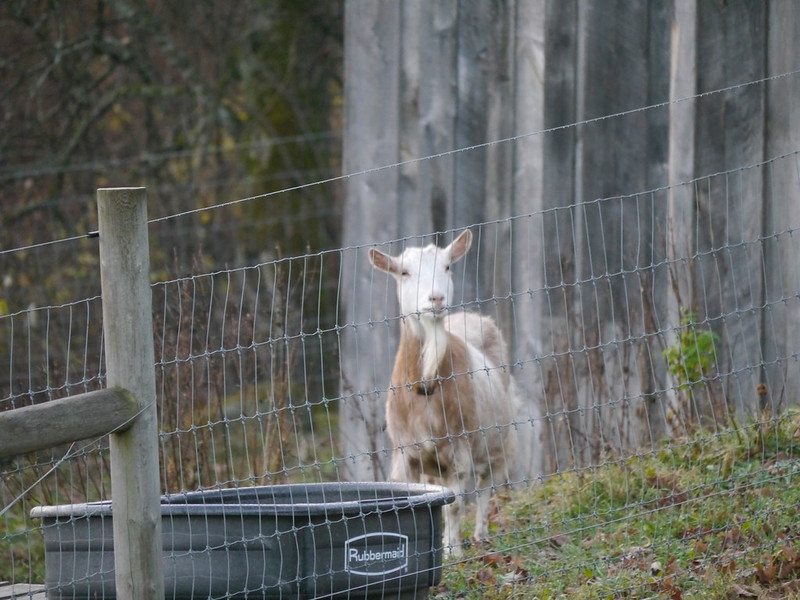 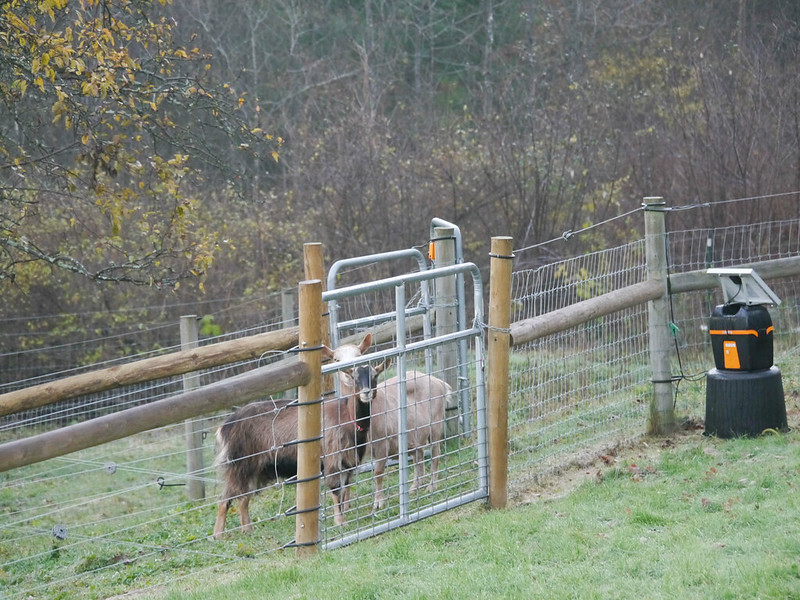 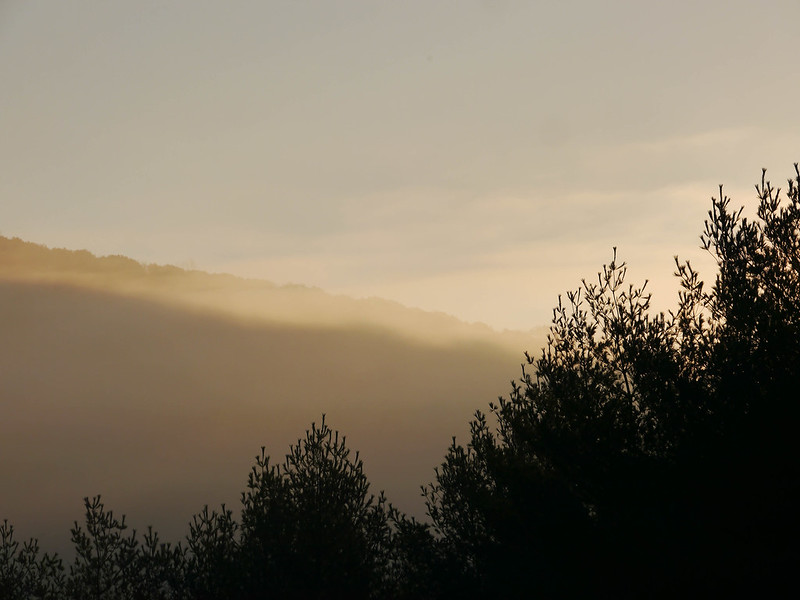 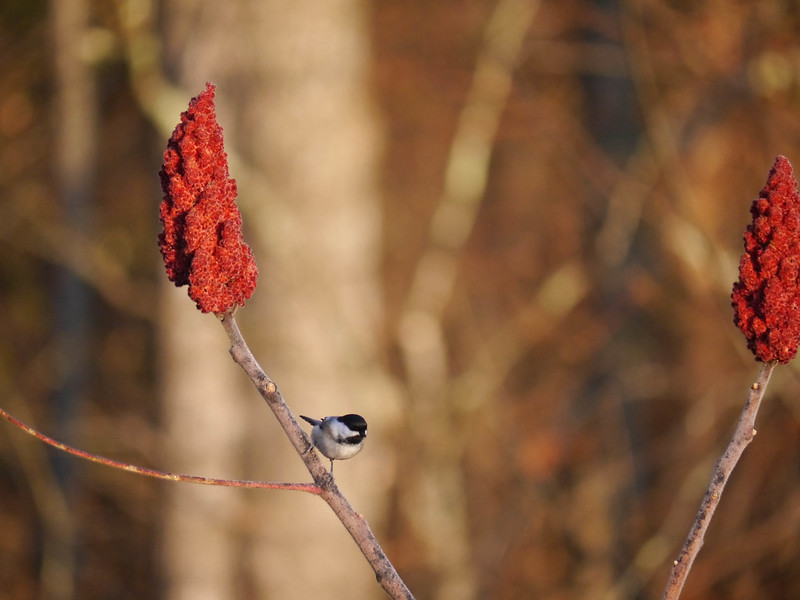 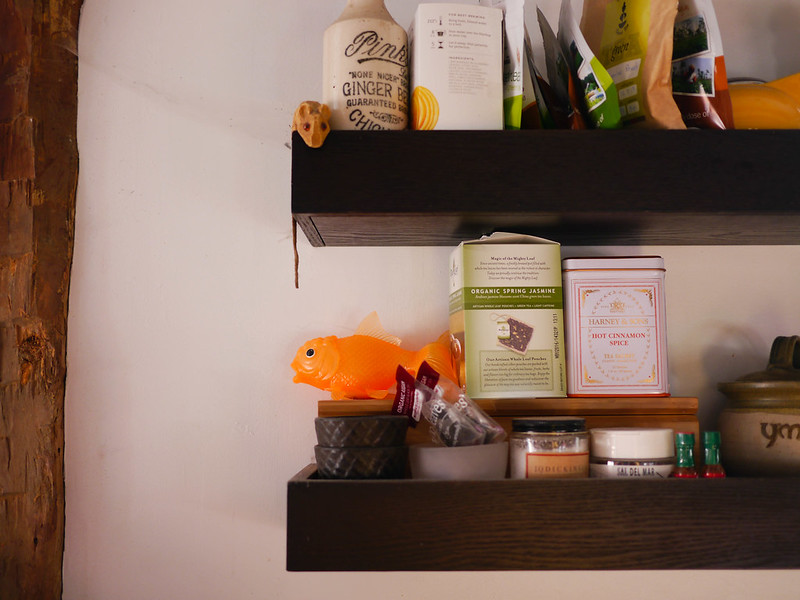 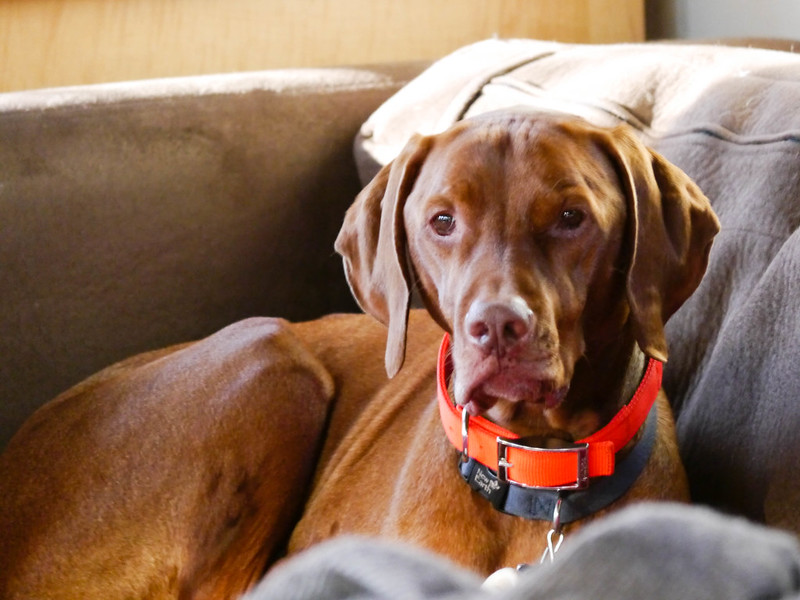 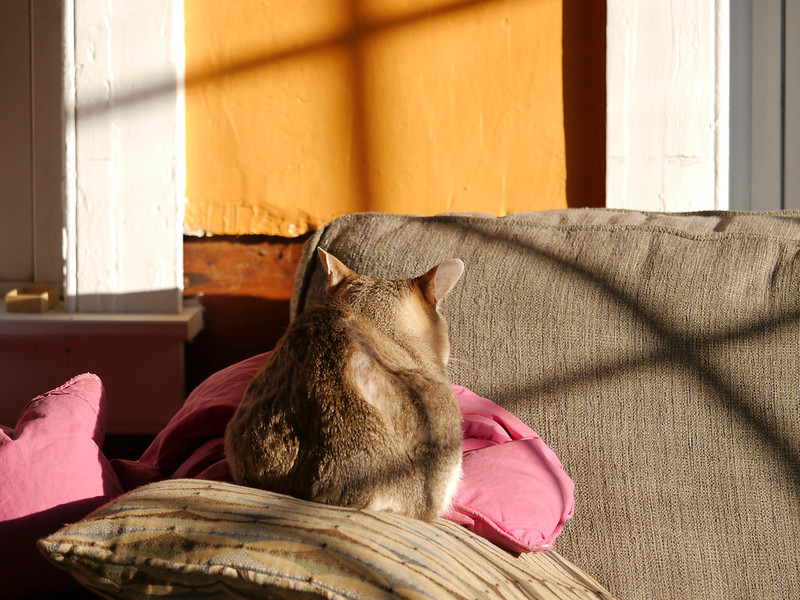 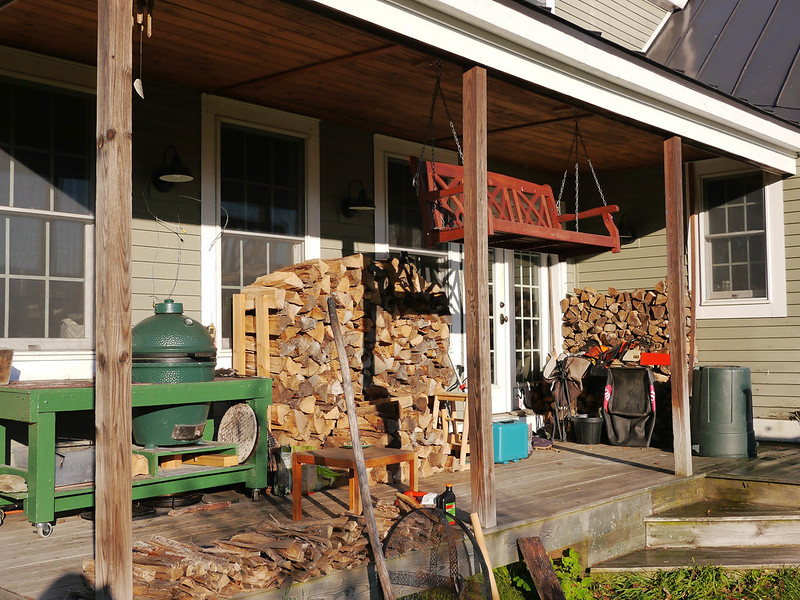 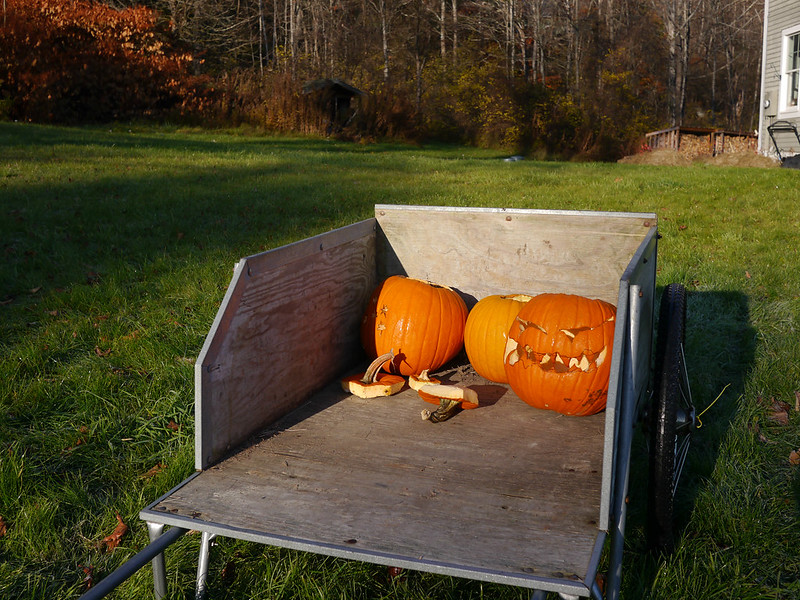 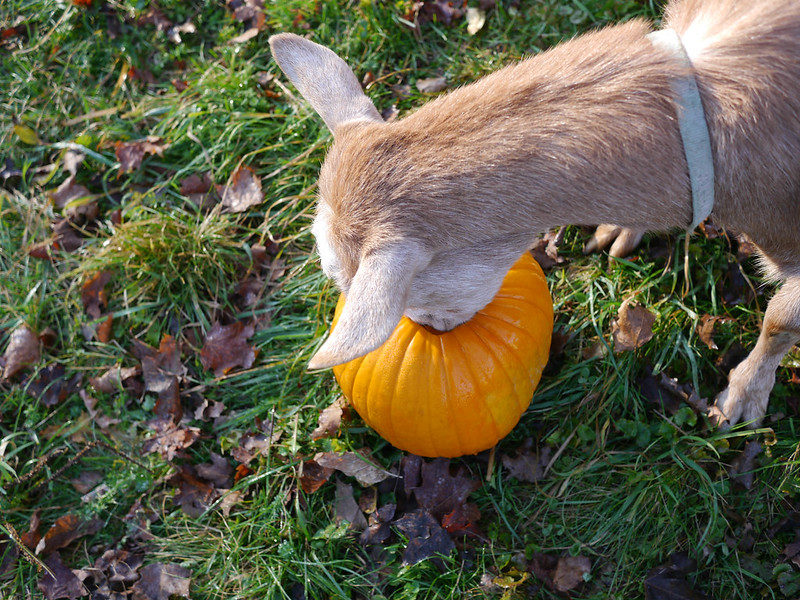 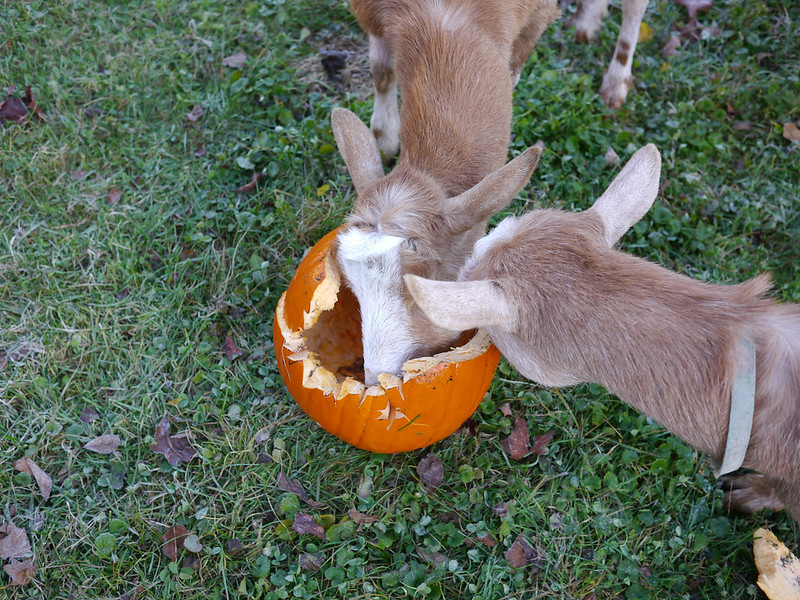 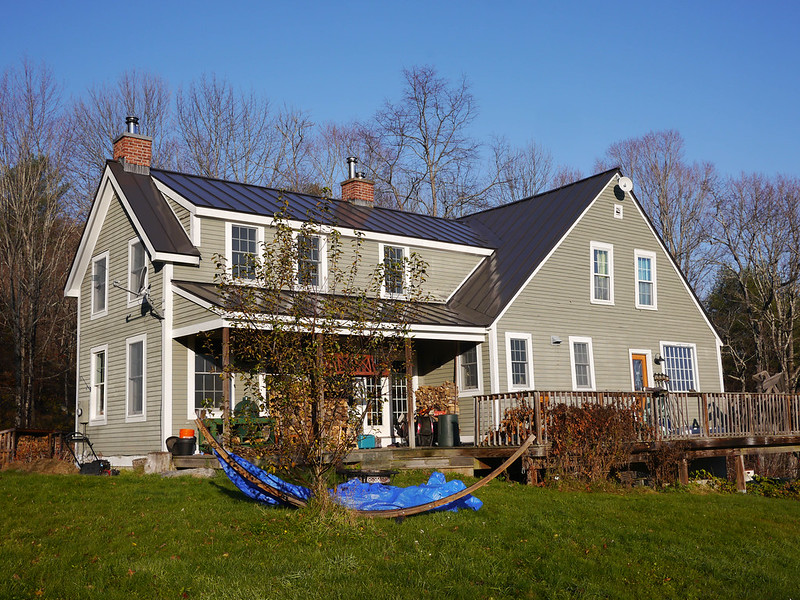 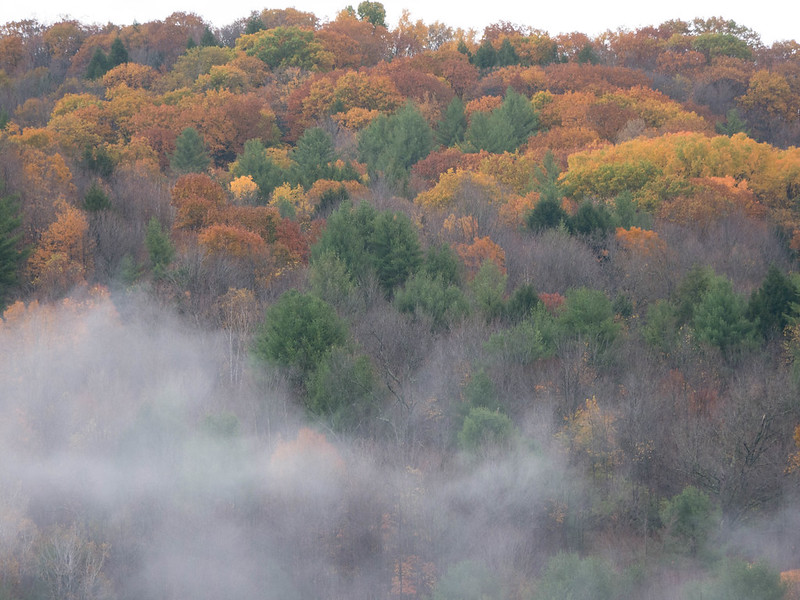 Oh gosh, today has Monday written all over it.

It started cold and predictably grey after a week or more of dark and dreary days. Where’s that brilliant October slant of light that’s made to cheer us even as November stealthily stalks us?

But I see a glimmer this afternoon, sunlight on the hills, picking out the few, stubborn remaining red leaves as if to spotlight the fading luminaries of the autumn floor show. Time to take final bows, put the folding porch chairs and the garden hose away, sweep the porch, remember where we (gleefully) stowed that snow shovel last spring.

You know how I feel about this.

But I have some antidotes in mind. Some new projects, another stab at NaBloPoMo (really? really. hmmm).

And when all else fails, in the face of bad news on the radio, sad news from far-off family and friends, dark afternoons, and the usual palette of worries and anxieties, I offer you my sister’s new baby: Brutus. Three months old and you just can’t be too sad when he’s in the room. 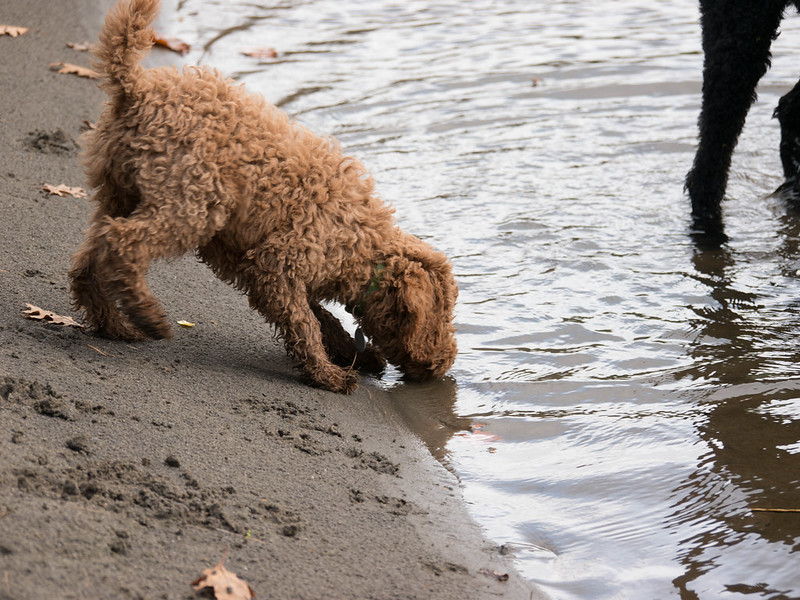 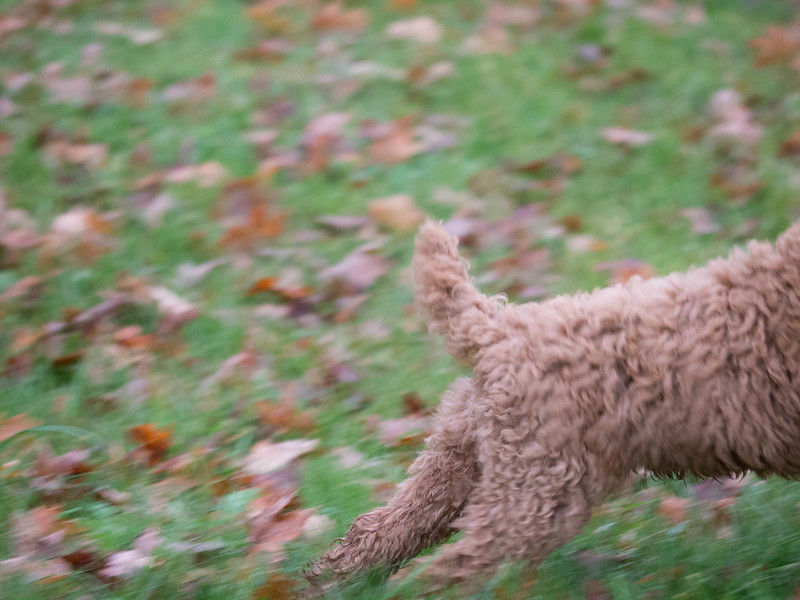 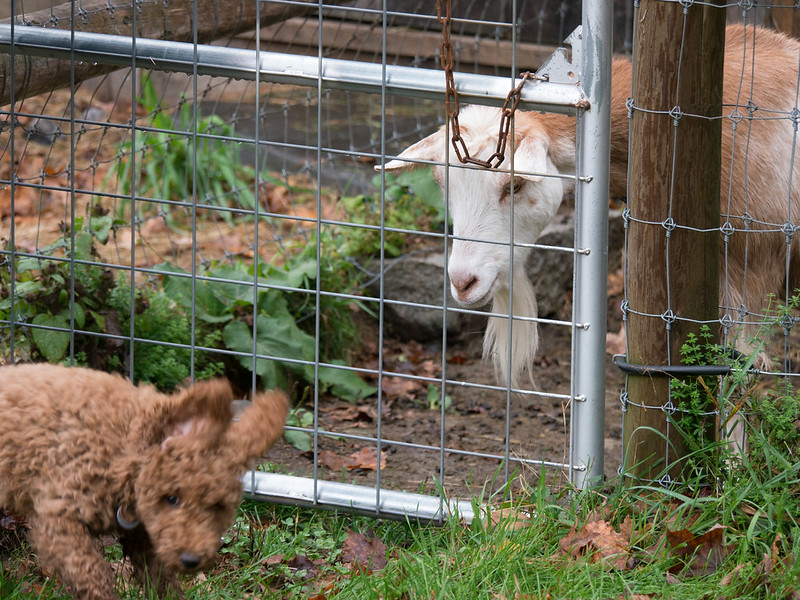 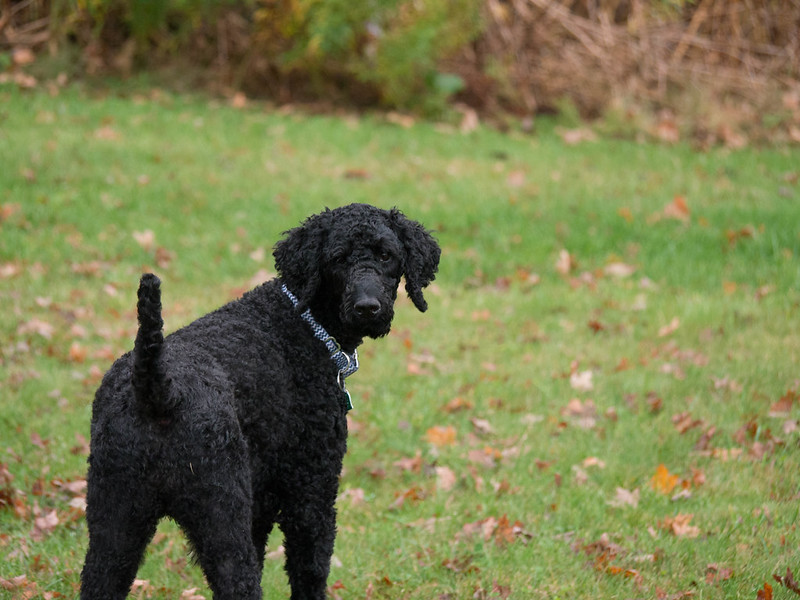 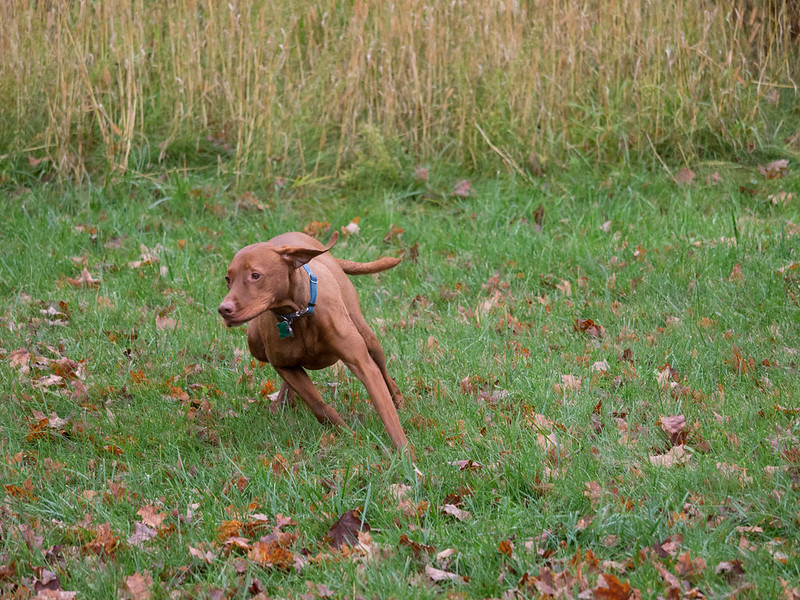 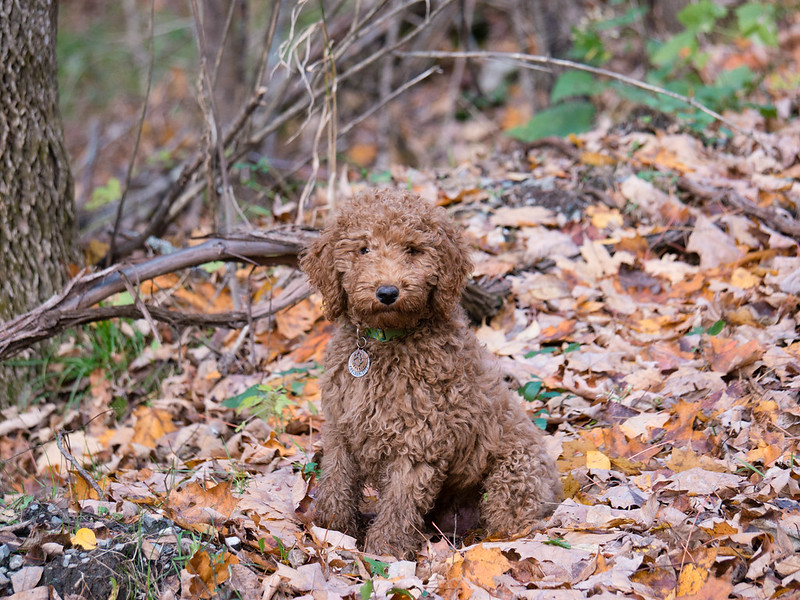 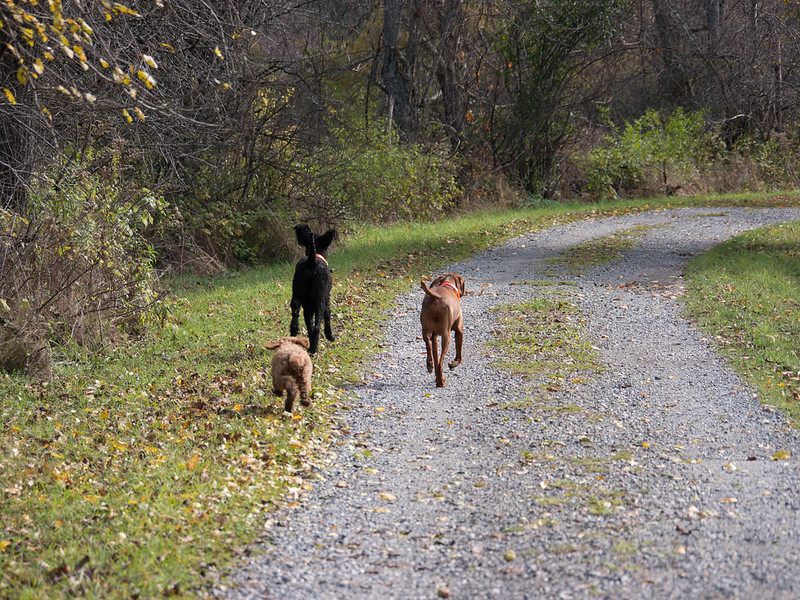 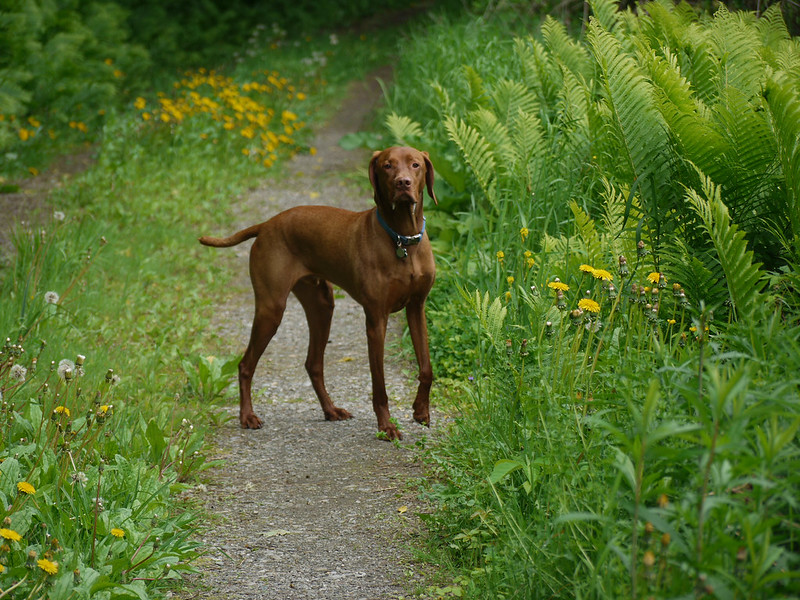 Our goofy, neurotic, lovable, thinks-he’s-a-lap-dog dog turned six today. Which makes him (as a friend pointed out) 42 in dog years.

He still wants to hike for hours, and he jumps like a kangaroo in the unmown hay field by the river, but he’s also content lately to nap half the day away, and he’s showing just the tiniest hint of grey on his chin and muzzle.

But he’ll always be a pup to us.

I asked him what he wanted for his birthday. I could have guessed his answer: cookies and a long walk. So out we went. Surprisingly, no one else was out on this beautiful June day. Well, except for the red-winged blackbirds, and the red-spotted efts. We had a little party. 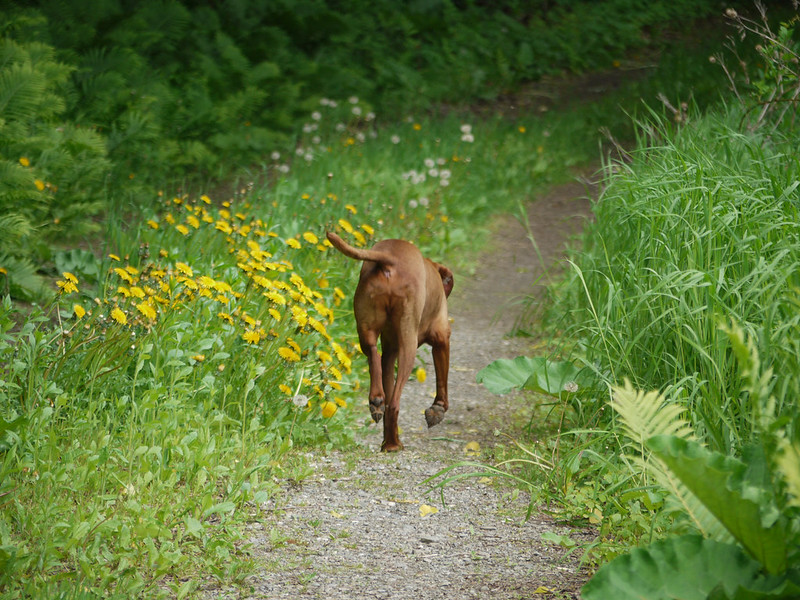 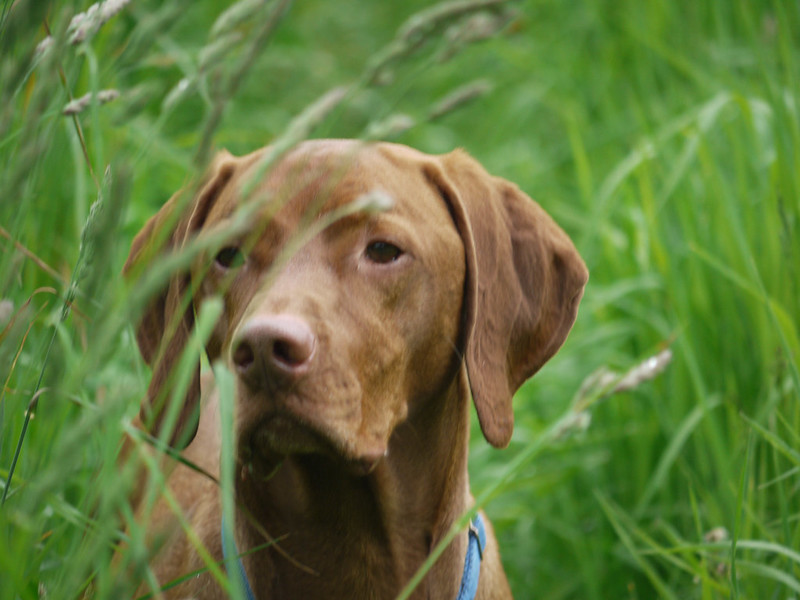 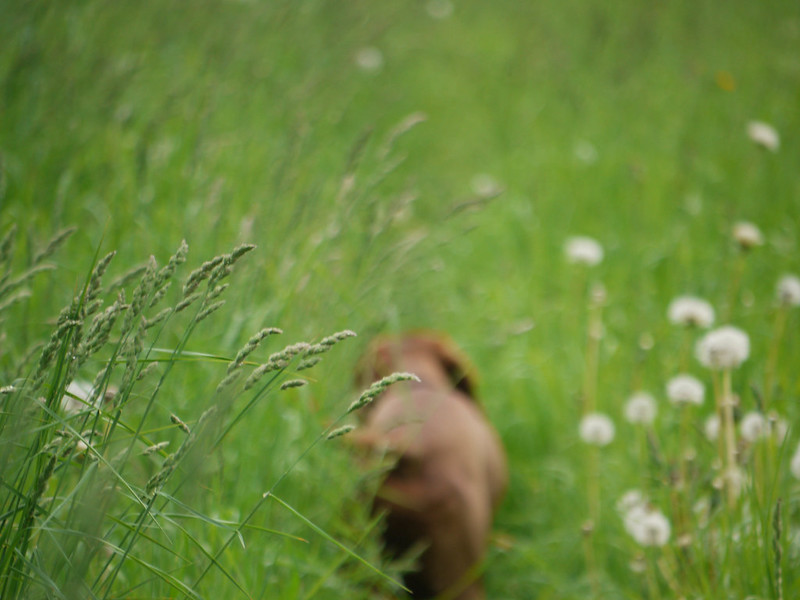 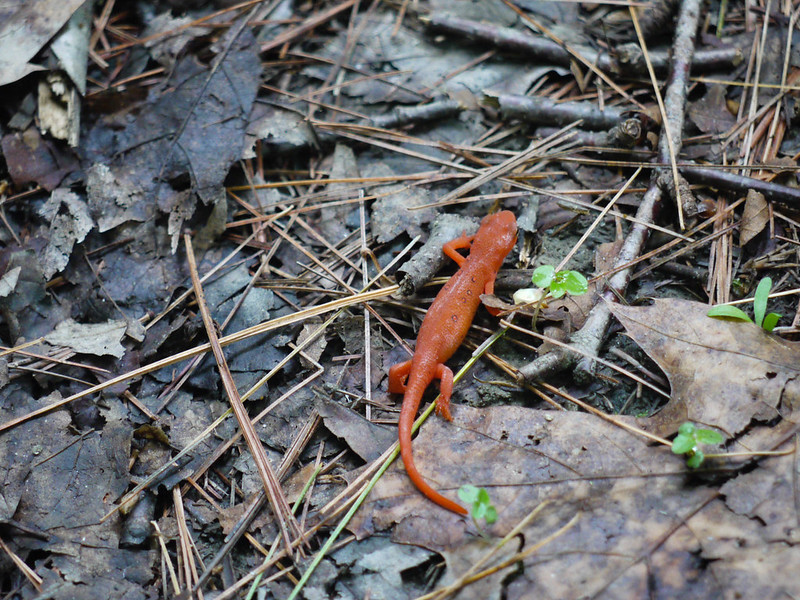 These photos are in response to this week’s theme for the 52 Photos Project. You should participate, too! Read about how it works here. You can see a gallery of everyone’s photos for this week’s theme here. To see a list of all my blog posts for this project, go here.

Gryfe turned five this week. He’s in that wonderful doggy sweet spot between puppy and old dog. He doesn’t chew things up that don’t belong to him (he never actually did), he doesn’t need non-stop activity and attention (he begs to differ), but he’s got energy to go hiking for as long as I want (always longer than I want), and he hasn’t yet started the slide into old, grey dog.

This morning, after singing him “Happy Birthday,” we were talking about how, if it hadn’t been for him, we wouldn’t have Darcy and Dory bouncing around in the goat yard right now.

You play this game, too, right?

The one where you reconstruct the trail of connections from one event to another that otherwise seem wholly unconnected.

Let’s see. How does this one go?

There. From Gryfe to baby goats in one short paragraph.

Of course, we could go further back and trace the path that got us to looking for a puppy in the first place (start with our decision to get our first Vizsla, Phoebe, and work back from there).

How about this one? Darcy and Dory exist because…

M’s sister S moved to Boston. And because she was in Boston, M moved there. Which is where we met. And became friends and dated and married and moved to Pittsburgh and moved to Vermont and bought a dog, Phoebe, and then another dog, Gryfe.

Oh, and Hyla exists, thanks to S’s move, too. (I’m skipping a lot of small steps in there so that I don’t bore you.)

Okay, now this is interesting (I think). Let’s follow another branch. We moved to Pittsburgh because I accepted a TAship there for graduate school (if I’d made another choice, we might have ended up in Austin or Ann Arbor or elsewhere). Because we moved to Pittsburgh, M’s old friend (also M) decided to move there. And there he met his future wife, B, and because they met and fell in love, they had a bouncing baby boy. Now they also live in Vermont, and have dogs and cats and friends and bake amazing things and write stories and do all those things people do.

So the fact that S moved to Boston resulted in at least two marriages, two babies, two families living in Vermont, many dogs, cats. And, of course, Darcy and Dory. And who knows what else? This sweater I’m wearing. The books on my desk. The slope of my handwriting.

Play this game enough and it becomes dizzying. You begin to realize (if you haven’t already) how unlikely it is that you—yes you, right there—or I exist at all.

What did you do today that will change the course of your destiny? Or someone else’s?

I met a woman on the trail today; her three dogs greeted my one, and she and I talked. That was unusual. My walks are usually solitary. I’m thinking about her as I write, and wonder what tiny disturbances were set in motion when she and I stood talking in the mid-day glow.

The dog, however, doesn’t care about any of that. He had his walk. He had his visit to the goat barn. He had his extra treats with dinner. He chewed his squeaker-filled penguin toy until it squeaked for mercy. And now, birthday boy, he’s asleep on the sofa next to me, his paw twitching with a dream.

I’ve been quite inclined to do very little. But the dog will have none of that.

We walked in the rain, which is actually very fun, assuming 1) you abandon yourself to getting wet, and, 2) you can come home to dry, clean clothes.

The walking gave me time to think about words and things I ought to be doing and people I miss. It also gave me time to watch the river, in a big ol’ hurry to get over the rocks and under the bridge, where it settles into a slower flow.

After we got home, I dried the dog with a towel, then went to make tea. The dog disappeared. I don’t know where he went. I looked upstairs to make sure that I wouldn’t find a soggy dog on the guest bed. Nope. No dog.

I looked on our bed, but all I found was a napping cat. I didn’t find the dog anywhere. After awhile, he reappeared and curled up on his bed next to my desk. I’m trying not to pry, but am very curious where he was.

I think that’s kind of great.

And all this is mine.

This afternoon, I’m turning that rhubarb into jam by roasting it with brown sugar, ginger, and cinnamon.

Oh, and I enjoyed reading this article about R.F. Scott’s Antarctic medicine chest.

And this? Well this just made me smile.

Like many people who write for a living, I sit here alone at my computer much of the day and mutter.

Not to myself, mind you.

The cats, with their interrogative tails and their insistent meows, are always making demands disguised as questions.

They don’t wait for answers. They just keep asking. I answer. No. Later. You can’t have that. Leave the dog alone. Leave each other alone. Get out of the sink. We keep up this exchange until they fall asleep in little cat piles on the sofa cushions, or until I boot them into the basement and shut the door behind them.

Our conversation is not very satisfying, but at least it’s reliable.

With the dog, it’s more a series of polite requests and assurances.

Me: Don’t worry, we’ll go soon. I just have to write this thing.

Okay, I can wait. Oh, there’s a scary cat. Can you please make the cat go away? Also, I love you. So much.

It’s a sweet-but-tiring sort of conversation. The walk would be good for both of us. The cats are scary. But I don’t want to talk about it all the time. Can’t we talk about something new? Like, I’d really love to know more about what he can smell when we go for a hike, or his opinion about which route we take on the walk, or why the toaster used to scare him.

The goats and I have a different patter. Every morning, I greet them with a bright, “Good morning” and they stare at me from the pen. Then one or two bleat in greeting. I know it’s a question. Have you got any banana peels, or artichoke leaves, or grain?

Once I’ve answered that question, the conversation changes. Albus talks to me by sniffing my hand and my hair, then exhaling next to my face, then inhaling my breath. Lars stands close, shyly, bends his neck, silently presents his forehead for scratches. Willow nickers, asking if maybe I have an extra treat, then sloppily licks my nose, regardless of my answer. Westie stand away from the crowd, stares, and asks me with those gentle gold eyes to come to her, to rub her forehead.

And Wellesley. A week from her kidding date, Wellesley and I talk a lot. Her bleat sounds like she’s softly clearing her throat over and over. Ahem. Ahem. She has expectations. They include being served grain, then being served cuddles. She rubs my legs with her head the way a cat might. She makes satisfied little grunting sounds. Sounds of contentment. I reply in kind, with little bleats and grunts and sighs. I don’t know what either of us are saying, but I get the gist. I remember, long ago, that feeling of waiting, and expecting, and wanting a snack and some affection.

So we talk about that. And then we’re silent. And we wait.

~~~~~~~~~~~~~
This photo and post are in response to this week’s theme for the 52 Photos Project. You should participate, too! Read about how it works here. You can see a gallery of everyone’s photos for this week’s theme here. To see a list of all my blog posts for this project, go here.

:: Sleet! Ice! Hail! Snow! This makes me happy. Why? Because it’s April and it just won’t last. Enjoy your last gasp, winter. I’ll see you next November.

:: In the mornings, the dog gets up with the rest of us, goes outside, has his breakfast, begs for H’s breakfast, stands by the door as I wave goodbye to M & H. And then you know what he does? He looks at me, he sighs a long, slow sigh, and then he trots back upstairs to bed for a couple of hours. He’s so smart that way.

:: I really wish my mom could see this!

:: New baking toys for my birthday.

:: April? Time for a pilgrimage.

Whan that Aprill, with his shoures soote
The droghte of March hath perced to the roote
And bathed every veyne in swich licour,
Of which vertu engendred is the flour;
Whan Zephirus eek with his sweete breeth
Inspired hath in every holt and heeth
The tendre croppes, and the yonge sonne
Hath in the Ram his halfe cours yronne,
And smale foweles maken melodye,
That slepen al the nyght with open eye-
(So priketh hem Nature in hir corages);
Thanne longen folk to goon on pilgrimages…

–Geoffrey Chaucer, from the “General Prologue” of The Canterbury Tales