Here’s the little house we’re renting until we can move back into our house:

It has all the basics: one bedroom, a big living room (with woodstove), a spacious kitchen, a bathroom, a laundry room, and nice deck. Even better, it’s just up the road from our house, so we can stop by to view construction progress every day.

It’ll go just fine, but we already miss our own house and can’t wait to be home again.

On Sunday afternoon, Michael and Hyla took the opportunity to do a little painting on the kitchen wall (which will be knocked down during renovations).

Two big excavators arrived on August 31, as did the “steel”, the huge steel I-beams that will be slipped under the house to support it as the house is lifted.

Here’s a view of the littler of the two excavators, at the approximate location of our new parking area (this is taken from the current house location):

And here’s Phoebe checking out all the excitement:

Along with the big machines, McKernon brought a crew of guys with steel bars, sledgehammers, and other hand tools. Their job was to take away all of the ell except the parts we’re going to move and reuse (namely, the posts, beams, and some of the nice boards). This is what the ell looked like partway through the day, taken from the doorway between the current living room and the ell:

And here’s the ell by the end of the day:

At some point, near the middle of the day, one of the excavators came by the house and ripped the deck away:

By the end of the day, the yard was transformed into a level plain where the crane can sit and where the house can be placed on its way to its final home. Hyla calls this space the “airport” because she can spread her wings and fly.

This leveling also exposed one side of the foundation of the house, where McKernon will create holes into which the steel beams will be placed:

After more than a month-and-a-half of drought and a week of chasing Lee by phone (Lee is the man who helped dismantle the barn and was to burn it, but who doesn’t have a phone and is near impossible to track down), the barn is finally burned on August 21!

These photos don’t do it justice. At times, the flames were two-thirds the height of the surrounding trees, but Lee knew what he was doing, and only one branch of a nearby tree burned slightly. Other than that, only the pile itself burned.

We could feel the heat from the house. The fire started around 8:30 am. The big flames were gone by noon. We could still see a glow that night. Puffs of smoke drifted out of the pile for several days after. 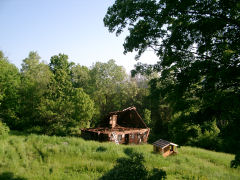 Well, actually, it began awhile ago, but the actual physical work begins this week as Yellow Barnworks begins to tear down the old barn, where the house will eventually (magically) go.