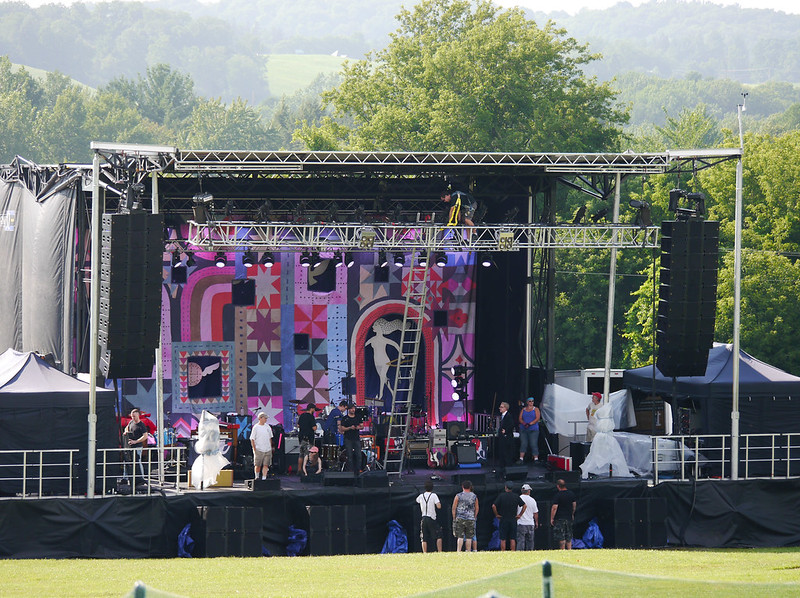 Not entirely by plan, but this summer became our summer of concerts: The Weepies, Idina Menzel, Neil Young, and The Decemberists, the last of which found us at the end of July on a lush green lawn on the grounds of Shelburne Museum.

There’s something thrilling about hearing live music outdoors on a summer evening. The acoustics of open air. The sad whine of the harmonica. The reverberating beat of the drum. The rhythmic jangle of the guitars. And the heat of the day and glare of the sun, at first nearly unbearable and then, as the evening draws on, imperceptibly dissolved into the atmosphere.

There’s something about it that can fix the moment so fiercely in your memory that you can nearly feel the heat of the summer evening and the sway of the songs years later in the remembering.

All the attached memories are there, too. Or will be. The funny guys waiting in line in front of the gate, talking about shows they’ve been to, and how to pronounce “biro” and “gyro”. The friendly couple behind us who, it turns out, had been to many of the same shows we had. Watching the crew prepare the stage. The opening act’s sound check. The gate opening and the crowd fanning out to claim the best spots on the lawn.

And then there’s the daughter, nearly 16, who finds her place to stand right at the foot of the stage, next to that friendly couple, while her old parents set up the chairs, beach towels, and a picnic.

During the opening act, the crowd by the stage is manageable. We can still see that 16-year-old’s head of gorgeous hair. By the time The Decemberists have appeared, the standing crowd has reached our blanket like the incoming tide arriving at our sand castle. I join the crowd while M stands his ground, preserving our tiny acreage.

The band is playing. They have a catalog of soft, sad, folkish tunes, but tonight is for rock’n’roll and it’s loud and we’re all dancing and singing La de da de da, de di de da de da until our voices are cracking with exhaustion.

I can’t see H. I can’t see M. But I know we’re all singing, nodding our heads, reaching arms into the air. I can feel the rumble of the bass and the driving beat of the drums through the ground, through my feet, up into my chest. We’re out of eyesight, but I feel bound to them by the music.

In just a couple years, that girl will be on her way, further from us than that July summer stage. That girl who would cling to us in tears at daycare drop-off, who wouldn’t willingly go to a birthday party or “play date” on her own. That girl is in the front row, making friends with people we don’t know, and having the best night.

At the end of the show, the audience scattered, but she hung out by the stage, hoping for a souvenir. She lucked into a used Colin Meloy guitar pick, but then felt compassion for the woman next to her who desperately wanted it, and gave it to her, and then immediately felt sad for giving away such a prize. To the rescue, her father, who convinced a stage hand to give her Colin’s set list, and then spotted one more pick lying on the stage. He’s tall and with a determined jump-reach he snagged it and put it in her hands. Parents are sometimes still needed. 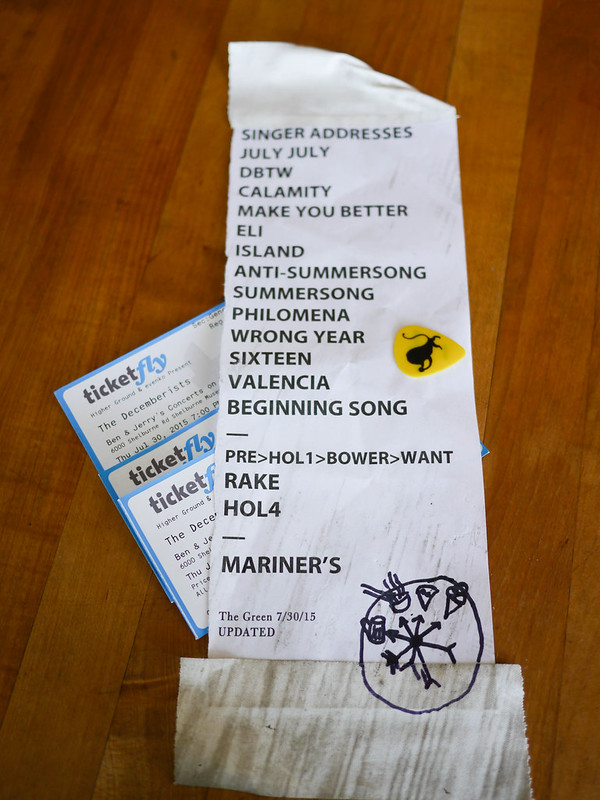 I think we would have happily listened for hours, but it was over and with so many songs we still wanted to hear. How greedy we are.

Did I mention her smile? Did I mention how I danced in a crowd of strangers? Did I mention how, even now, I’m feeling a catch in my throat, thinking about the distance between that night two weeks ago and today and whatever comes next? Did I mention the moon? The huge moon, nearly full and rising behind us after the sun set behind the stage?