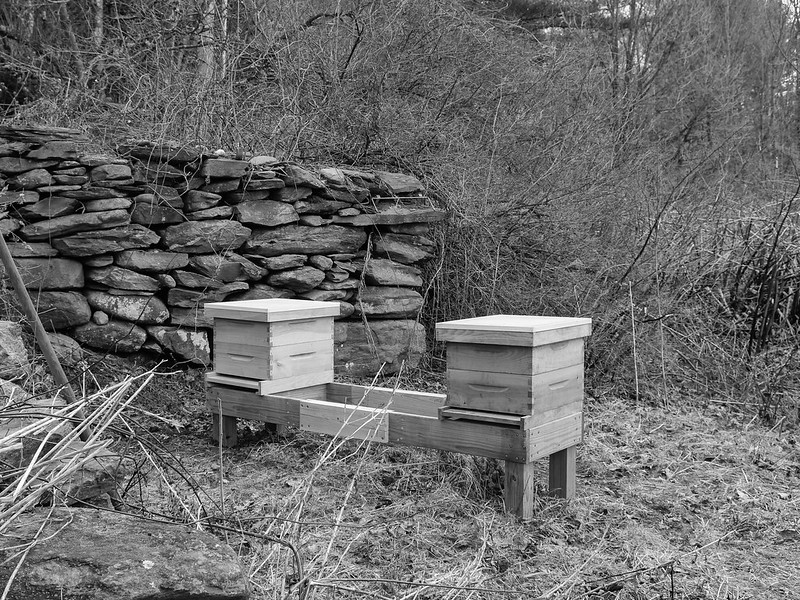 Admit it. You’ve been wondering about the bees, haven’t you? (Please say you have. I like people who take an interest in bees.)

I haven’t talked about them much because, well, as we’ve said before, bees will break your heart. And they do. And they did.

I felt a fresh sadness then even though we pretty much suspected they hadn’t survived. A sadness for their loss. A sadness for not being able to care for them well enough. A grey winter sadness on one of those hopelessly cheerless late winter days when the glisten of winter is gone and spring is still somewhere a few miles down the road, around another bend.

I trudged back to the house and broke the news to M.

We set up a second hive.

We crept closer to spring. There were some warning signs. Postings on the local town email list: bear sightings.

We’ve lived in this house for 21 years now and only just last fall saw our first bear. She (or he) looked like a young one; it ambled out of the valley and through our yard and was gone.

We’d thought about fencing the hives, but since we hadn’t had any bear trouble before and live close to the road, we hemmed and hawed about it. It would be another thing to do, to maintain, to deal with when checking the hives. Maybe later.

On April 26 we brought home the bees. We installed them in their hives. It went (nearly) like clockwork. We fairly congratulated ourselves on how well we’d done. We were getting the hang of this beekeeping thing. The bees were gentle. It felt nice to see them buzzing all around us as we filled their feeders with sugar water to keep them going until things began to bloom.

We tucked them in for the night, promising to visit in a week to refill the feeders and to check for eggs.

Two nights later, M let Gryfe out for a goodnight pee and the dog went nuts barking. M shone a flashlight in the direction of the hives and saw the disaster. We didn’t see what had happened, but we knew what had happened.. 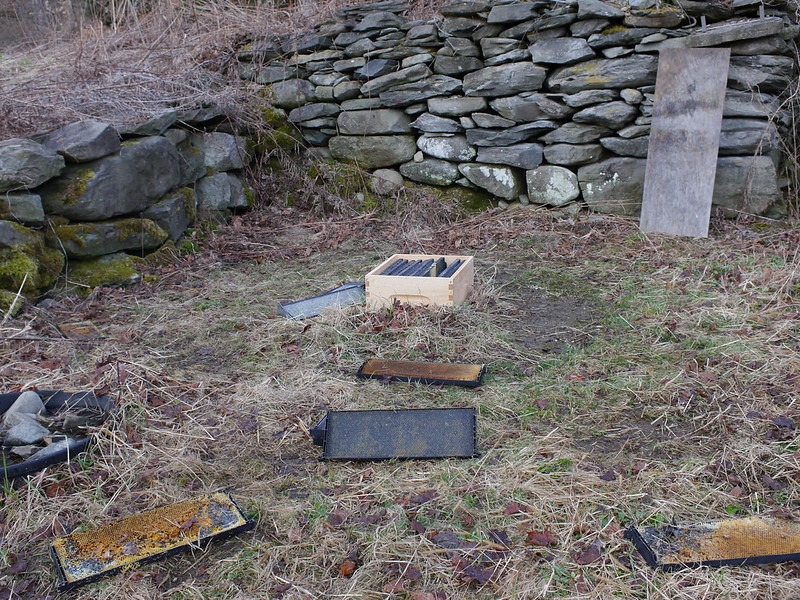 We went out then, in the dark, and collected who we could by flashlight. Hive pieces were all over the ground. Bees were confused and scattered. We had no idea if we’d saved the queens or not. We hurriedly reassembled what we could inside the brand new (electrified) goat pasture fence. The pasture fence was so new, we hadn’t even set the new fence charger up yet; we did that in the dark, too, with bees frantically buzzing all around us.

We were covered in sweat and sugar water. It was dismal.

Still, we went to bed hopeful. There were a lot of bees left. Maybe we’d saved the queens. Maybe they weren’t all too confused.

The next morning we went right to the bedroom window to be sure the bear hadn’t broken through the fence. All was fine. We saw bees coming and going from the hive.

I put on my bee suit a day later, lit up the smoker, opened the hives and refilled their syrup. 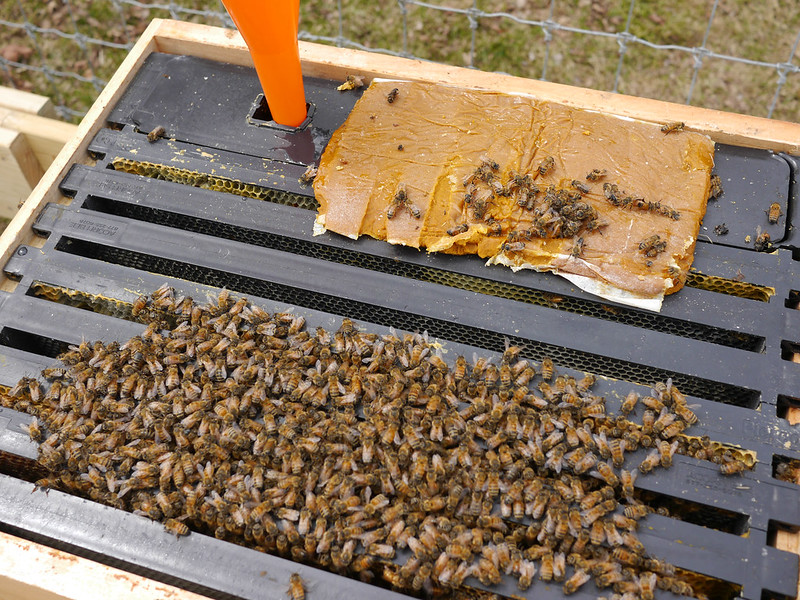 They were active. They were striped and beautiful. They were coming and going, beginning to forage in their new valley. And things looked good, promising.

But they were in free fall. We suspected it, and then we knew it. Fewer and fewer bees emerged. We checked the hives earlier this week. Mostly bodies, with a few slow, confused bees wandering around the frames. The queens were either lost or killed or too stressed to lay eggs.

Now the hives are sitting there, safe behind the fence and the only thing we can do is clean them out, find new bees, and start again.

We need bears, too. Just not on the bee side of the fence.