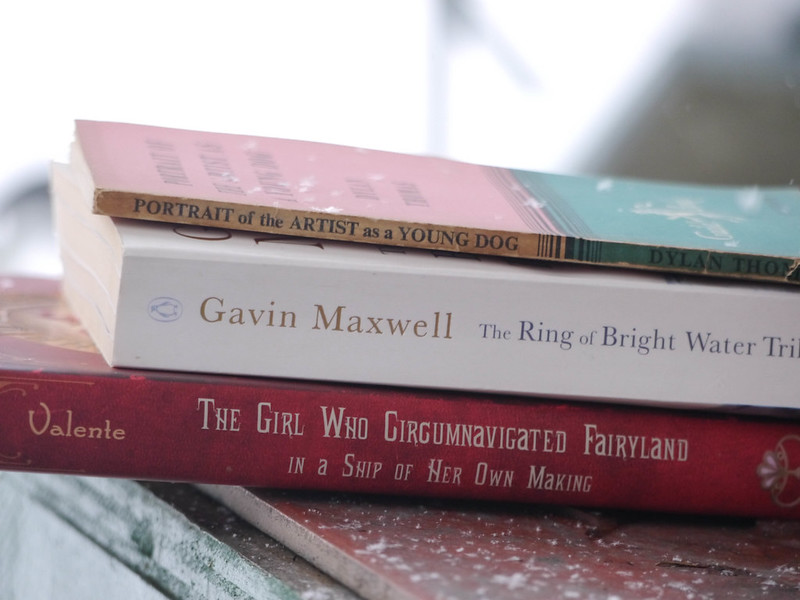 In 1956, Gavin Maxwell was traveling in southern Iraq when it occurred to him that he would like to own an otter (his beloved dog had recently died). Though he had a flat in London and traveled widely, he also had tenancy of a remote house in Sandaig, on the western coast of Scotland, and he thought an otter would live a happy life there, encircled by the ring of bright water.

He knew nothing of raising an otter, and the first one he adopted died after a short time in his care, before they even made it back to Scotland. And then he found Mijbil. The first encounters are delightful, with Mij curling up with Maxwell in a sleeping bag for the night. Maxwell describes Mij’s antics in the London flat, his affectionate and curious behavior, as well as his destructive tendancies. We see Mij in harness and leash, being walked on London streets, or playing with toys or in the bath.

Soon after, they travel up to Scotland and Mij is slowly given freedom to explore the land and water around the house: an otter’s paradise of streams, waterfalls, ocean, and fish. It’s all as sweet as a fairy tale.

But we know that all fairy tales have dark underpinnings, and so goes the story of Maxwell and his otters. Because, of course, otters are wild animals and, though darling and affectionate when young, they grow up to be adult wild animals, who have sharp teeth and claws, and unpredictable natures.

The first book in the trilogy, Ring of Bright Water, describes the best, most hopeful years of the endeavor. Other otters are adopted. And Greylag geese. Maxwell furnishes and renovates the previously empty house. He buys and renovates a boat. He marries (briefly). He has friends come to help care for the growing menagerie. He writes. And he writes beautifully.

One of my favorite passages is from early in the book, about the elver migration he witnesses at Sandaig, and another is his description of his neighbor’s children and their encounter with a rush of herring fry in the bay:

The sun was very low; the shadow of the house lay long and dark across the grass and the rushes, while the hillside above glowed golden as though seen through orange lenses. The bracken no longer looked green nor the heather purple; all that gave back their own colour to the sun were tge scarlet rowanberries, as vivid as venous blood. When I turned to the sea it was so pale and polished that the figures of the twins thigh-deep in the shadows showed in almost pure silhouette against it, bronze-coloured limbs and torsos edged with yellow light. They were shouting and laughing and dancing and scooping up the water with their hands, and all the time as they moved there shot up from the surface where they broke it a glittering spray of small gold and silver fish, so dense and brilliant as to blur the outline of the childish figures. It was as though the boys were the central decor of a strangely lit baroque fountain, and when they bent to the surface with cupped hands a new jet of sparks flew upward where their arms submerged, and fell back in brittle, dazzling cascade.

Alone, that passage is beautifully evocative, but it’s the next part that I can’t forget:

Then I saw that a hundred yards out on the surface was ruffled by flurries of mackerel whose darting shoals made a sputter of spray on the smooth swell of the incoming tide. The mackerel had driven the fry headlong before them into the narrow bay and held them there, but now the pursuers too were unable to go back. They were in turn harried from seaward by a school of porpoises who cruised the outermost limits of their shoal, driving them father and farther towards the shore. Hunter and hunted pushed the herring soil [fry] ever inward to the sand…Beyond them, black against the blanched sunset water, rose the towering sabre fin of a bull killer whale, the ultimate enemy of sea creatures great and small, the unattackable; his single terrible form controlling by its mere presence the billion of lives between himself and the shore.

The layers on layers, the way each each action has a reaction, the way one thing leads to an inevitable other. The story of “Ring of Bright Water” ends on a hopeful note. The next two books in the trilogy tell of sadness and disaster heaped on disaster, but I still can’t forget the golden early days when even a mad idea seemed like a good idea.

Our books for month 1:

We’d love to know what you read. Please leave a comment telling us about it!

We’ll see you back here on March 9!