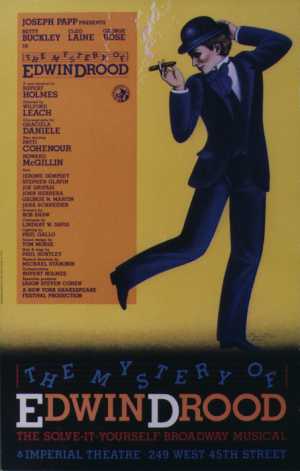 Second semester’s here and you know what that means, right?

You guessed it: rehearsals for the annual high school musical have begun! This year’s production is “Drood” (or “The Mystery of Edwin Drood”), based on the unfinished Dickens novel. It’s written by Rupert Holmes.

Fortunately, this production doesn’t include any references to piña coladas or personal ads. It’s more about murder, mystery, and several unsavory characters (all exceedingly more palatable). It also features a different ending every night (voted on by the audience). What could be more exciting for a group of actors than to not know which numbers they’re doing at the end of the second act until after intermission? Can you imagine that pressure? I’m glad I’ll be in the audience and not on that stage…

The cast list was announced yesterday. H is Princess Puffer. She runs an opium den. A stage parent can be proud of that.

Below is a recording of one of Puffer’s songs. Come to the show May 14-16 to hear H and her fellow cast members do it even better.