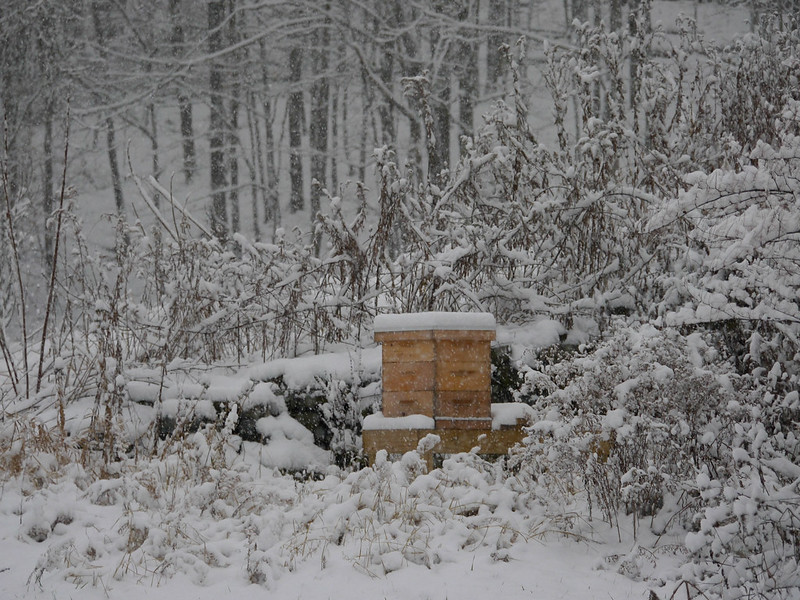 Pedants will tell me that it’s not officially winter yet, but let’s not quibble. Zero degrees F on the thermometer this morning, snow and ice solidly gripping the ground, Elliot the blueberry bush up to his neck in snow, another nor’easter roaring up the coast tomorrow.

Let’s call a winter a winter.

Today I watched the shivery sun sprint for the western horizon as if, like me, he just couldn’t wait to be in bed, under the covers, with a pile of books laid by. I swear he was behind the hill by 3 pm. And I know tomorrow I’ll see even less of him, minute by minute.

Watching the light rise and fall this time of year, a person can’t help but be obsessed a bit by the ticking by of seconds, to become a hoarder of sunlit minutes, to think of time as something solid you can put in your pocket and rub your thumb over during the day, wearing it down grain by grain.

This time of year, the night is an ocean. You can’t see the other side. But you can sail its surface. A story is like a puff of wind in your sail. This weekend, we went to our local theater to hear a story: Dylan Thomas’ “Under Milk Wood.”

I can try to describe to you how the play mesmerized me, how the chewy-lyrical language lulled the audience, then made us laugh, then cracked our hearts. I could tell you how we watched the minutes of a day in the village of “Llareggub” slide by, night to dawn to noon to dusk to night. I could tell you how we lived a day through the night, then, outside, how the moon was hidden but the poem was a light reflected in the snow.

But I can’t tell it anywhere as well Dylan Thomas and Richard Burton can tell it. So why even try?

To begin at the beginning:

It is spring, moonless night in the small town, starless
and bible-black, the cobblestreets silent and the hunched,
courters’-and-rabbits’ wood limping invisible down to the
sloeblack, slow, black, crowblack, fishingboatbobbing sea.
The houses are blind as moles (though moles see fine to-night
in the snouting, velvet dingles) or blind as Captain Cat
there in the muffled middle by the pump and the town clock,
the shops in mourning, the Welfare Hall in widows’ weeds.
And all the people of the lulled and dumbfound town are
sleeping now.

Hush, the babies are sleeping, the farmers, the fishers,
the tradesmen and pensioners, cobbler, schoolteacher,
postman and publican, the undertaker and the fancy woman,
drunkard, dressmaker, preacher, policeman, the webfoot
cocklewomen and the tidy wives. Young girls lie bedded soft
or glide in their dreams, with rings and trousseaux,
bridesmaided by glowworms down the aisles of the
organplaying wood. The boys are dreaming wicked or of the
bucking ranches of the night and the jollyrodgered sea. And
the anthracite statues of the horses sleep in the fields,
and the cows in the byres, and the dogs in the wetnosed
yards; and the cats nap in the slant corners or lope sly,
streaking and needling, on the one cloud of the roofs.

You can hear the dew falling, and the hushed town breathing.
Only _your_ eyes are unclosed to see the black and folded
town fast, and slow, asleep. And you alone can hear the
invisible starfall, the darkest-beforedawn minutely dewgrazed
stir of the black, dab-filled sea where the _Arethusa_, the
_Curlew_ and the _Skylark_, _Zanzibar_, _Rhiannon_, the _Rover_,
the _Cormorant_, and the _Star of Wales_ tilt and ride.

Listen. It is night moving in the streets, the processional
salt slow musical wind in Coronation Street and Cockle Row,
it is the grass growing on Llaregyb Hill, dewfall, starfall,
the sleep of birds in Milk Wood.

Listen. It is night in the chill, squat chapel, hymning in
bonnet and brooch and bombazine black, butterfly choker and
bootlace bow, coughing like nannygoats, sucking mintoes,
fortywinking hallelujah; night in the four-ale, quiet as a
domino; in Ocky Milkman’s lofts like a mouse with gloves;
in Dai Bread’s bakery flying like black flour. It is to-night
in Donkey Street, trotting silent, With seaweed on its
hooves, along the cockled cobbles, past curtained fernpot,
text and trinket, harmonium, holy dresser, watercolours
done by hand, china dog and rosy tin teacaddy. It is night
neddying among the snuggeries of babies.

Look. It is night, dumbly, royally winding through the
Coronation cherry trees; going through the graveyard of
Bethesda with winds gloved and folded, and dew doffed;
tumbling by the Sailors Arms.

Only you can hear the houses sleeping in the streets in the
slow deep salt and silent black, bandaged night. Only you
can see, in the blinded bedrooms, the coms. and petticoats
over the chairs, the jugs and basins, the glasses of teeth,
Thou Shalt Not on the wall, and the yellowing dickybird-watching
pictures of the dead. Only you can hear and see, behind the
eyes of the sleepers, the movements and countries and mazes
and colours and dismays and rainbows and tunes and wishes
and flight and fall and despairs and big seas of their dreams.

From where you are, you can hear their dreams.