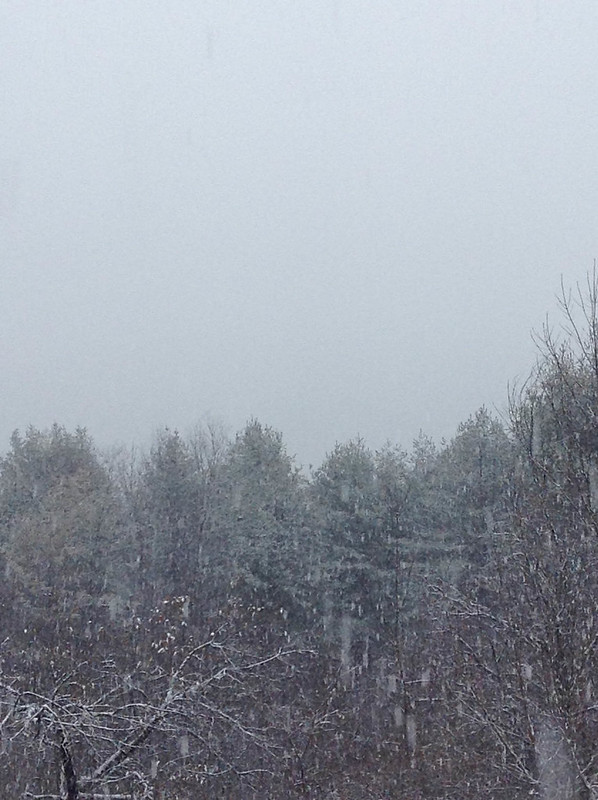 This is how it started.

It started because today is Gordon Lightfoot’s birthday, so he was on my mind (regular readers know I have a thing about Gordon).

Alarm went off (Nick Lowe crooning in my ear), but first thing I think is, “It’s November 17. Gordon’s birthday.” And that’s how it started.

I opened my eyes and even in the half-light, glasses off, I saw white on the ground. Just a sugaring. Enough to whiten the lawn, tree branches, and barn roof. An hour later fat flakes were falling and it was threatening to turn into an accumulation. At which point I put “Song for a Winter’s Night” on the stereo because that’s the tradition my sister and I have: First real snow fall of the season? Put that song on.

So that’s how it started, but what happened next is that I decided I might as well play Gordon Lightfoot songs all morning while I worked. Which I did. And song by song, the distinct feeling of being 15 or 16 in my teenhood bedroom came upon me. Those bitter cold mornings in the dark. Turning the stereo on by feel. Placing the needle down on the edge of the album. Gordon’s voice. That feeling of anxiousness and sleepiness on a winter Monday school day morning, at 15 or 16 when nothing much was making sense and the only things that did make sense were horses and music.

Until the song “Does Your Mother Know” came on. A song I never really cared for when I was 15 or 16. Back then, I skipped it more often than I listened to it.

And then the thing that began and accumulated abruptly changed into something else. I folded through myself and came out again as me, but a few years in the future. Because now I am a mother of a (15-year-old) daughter. And now I’m the mother in the song and she’s the one who had to go someday. The one who would grow so fast.

Does your mother know
You had to go someday
Does your mother know
That you would go so fast
Anyway, that’s all you think about
You’d call her if you could
But the letters that you write
In the faded winter light
Just tell her they tell her
That you’ve got ten dollars and you’ll be all right
And when you get straight you’re gonna come back east some day

And that song reached into me the way it never had before and I just had to sit there, stunned, snow and years shaken off all around me, trying to reconcile the person I was, the person I am, the person I will be. How we are all the same person. And never the same.