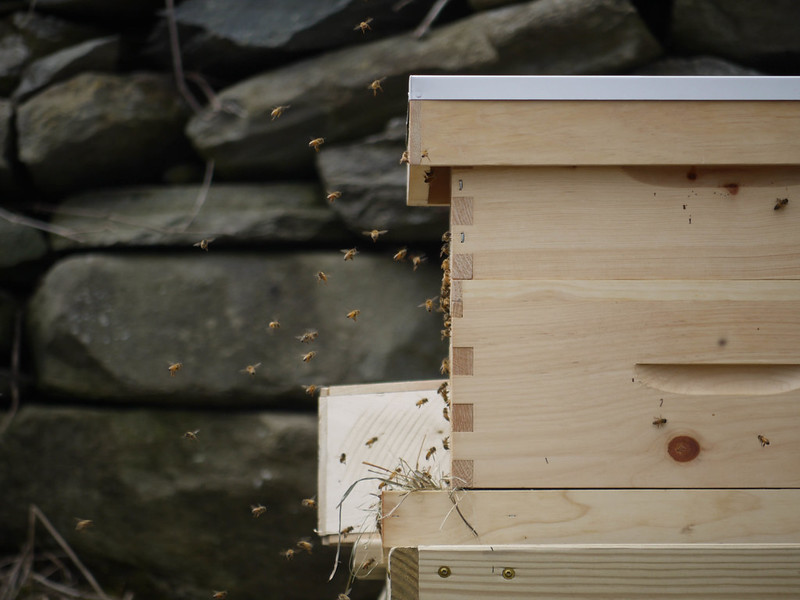 It’s been just under two weeks since the bees came to live with us, and I already feel such unexpected affection and affinity for them. I’ve always liked bees, or the idea of bees, or the form of bees: their fuzzy striped bodies, their matrilineal society, their essential work pollinating flowers and fruit trees, their waggle dance.

But I didn’t think about the life of bees in more than a passing way until I was informed that 10,000 + 1 (queen) were soon to be coming to stay.

And now? I think about them all the time. 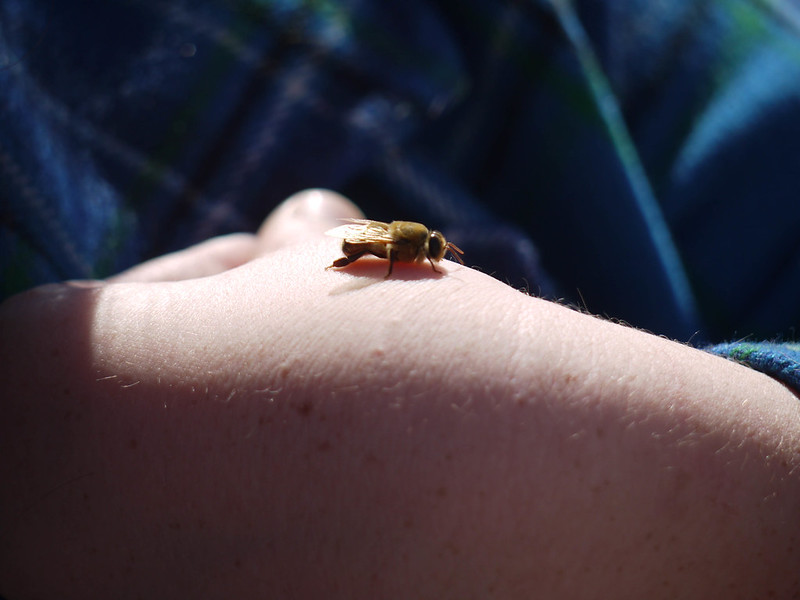 We’ve learned a lot in the last few weeks. For instance, bees arrive in packages (wooden boxes with mesh screen sides) that have been driven north from Georgia. On bee arrival weekend, everyone who’s ordered a package goes to the place where they ordered them and picks up their package.

The package contains approximately 10,000 bees (mostly workers, but also some drones), and a separate little cage inside that houses the queen. She’s locked in her cage by a plug of candy (really!).

Here’s our package, just after we picked it up and put it the car. They were very quiet. I expected to hear buzzing in the car, but most of the ride home we hardly heard them. They were probably a bit overwhelmed with all the travel, but I like to think the hum of the engine calmed them the way it calms babies and puppies. 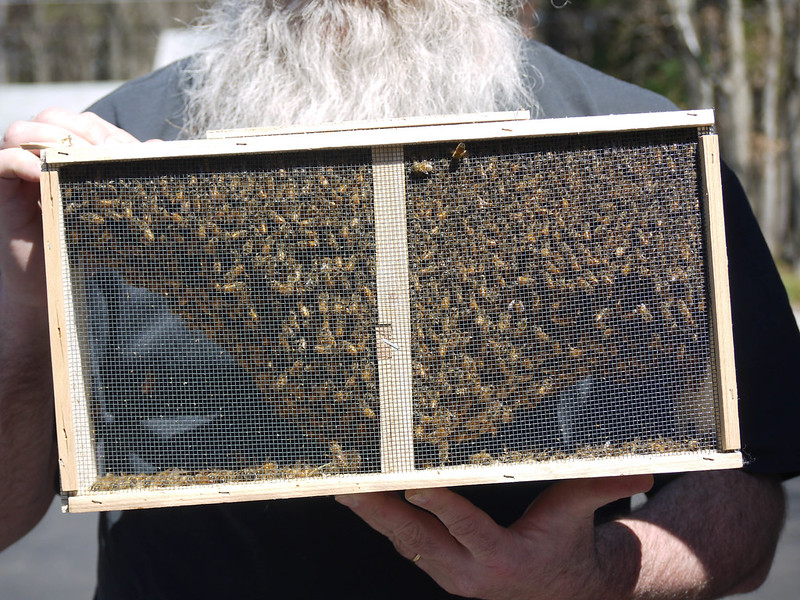 After we got them home, we finished setting up the hive. We left the package on the shaded porch, moved the new hive stand that Michael made over to the area we’d prepared the previous weekend (what used to be our garlic garden is now a hive garden), made the stand level by pounding it into the soil, then put the hive on top of the stand. The stand is a bit over 18″ high to keep out small curious animals who might be drawn to the honey (like skunks, which we never see around our house, but why take chances?). 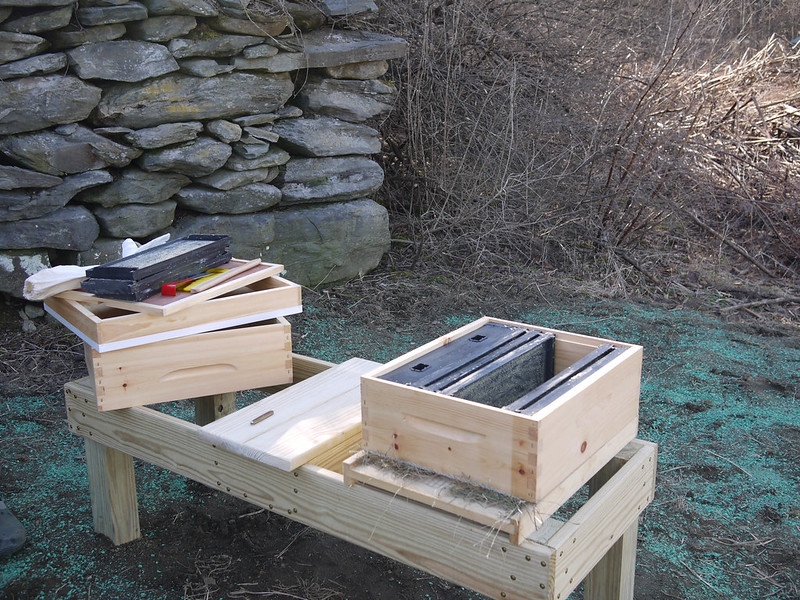 In the hive, we placed a set of black frames on which the bees will begin to build their comb and tend the eggs that the queen lays. We also inserted a hanging feeder filled with sugar syrup. This is what the bees will eat (along with a patty of protein that we supply them) until the flowers start budding and they can forage for themselves. Any day now.

Then we extracted the queen cage from the package so that we could put the cage into the hive. At this point, we made a mistake that almost lost us the queen (and where the queen goes, the hive goes), but quick action and thinking on M’s part saved the queen.

We need the queen. Without her, there are no new bees, and without new bees, the colony dies. A honeybee only lives a for a few weeks in the spring and summer (several months in the winter), so the bees in the package need to start raising up babies quickly, before they all die. The queen can live up to a few years, but if the rest of the bees die before she lays her eggs, there’s no one to tend the eggs until they emerge as new bees.

(See how much I’ve learned this month?) 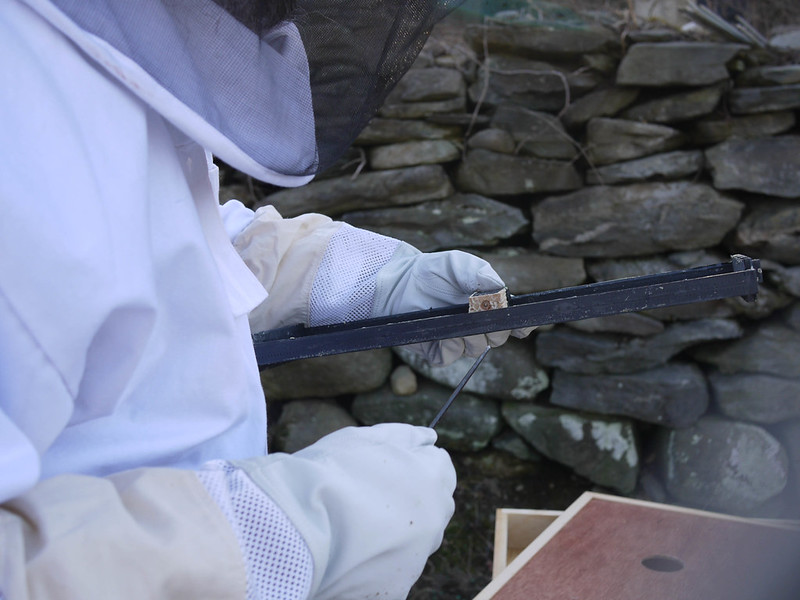 Since we need to make sure that the queen stays with the hive, we want to make sure she knows it’s home. The separate cage keeps her contained and surrounded by her colony for a few days until they’ve accepted the hive as home. They release the queen by nibbling away that candy plug. It takes a couple of days. By then, they’ve begun to settle in, releasing pheromones that mark the wooden box we’ve provided as home sweet home.

To start the process, before we put the queen into the hive, we used a screwdriver to make a small hole in the candy. The workers do the rest. 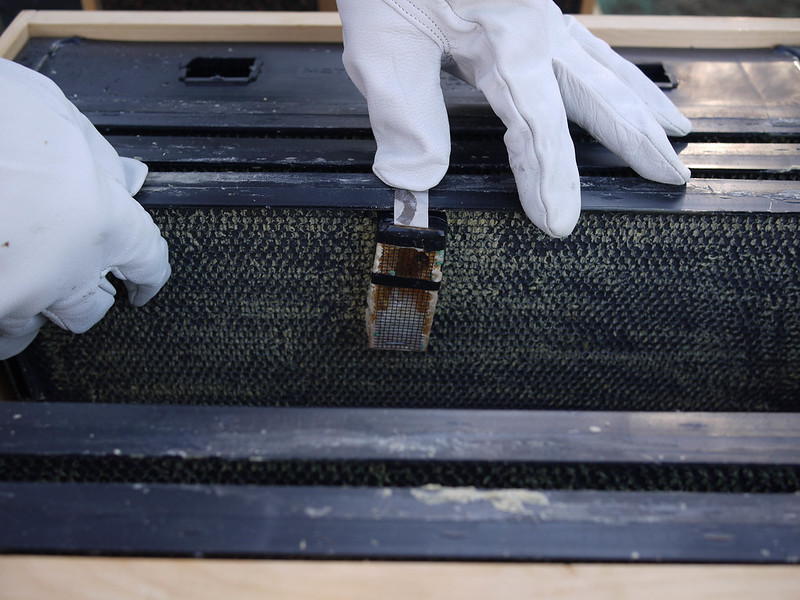 After we attached the queen’s cage to a frame, we spritzed the rest of the package with sugar water. This distracts them for a bit and gives them something to do (namely, clean it off their wings and bodies) other than get angry with us while we move them from the package to the hive.

Once they were well spritzed, it was mostly a matter of just turning the package over and dumping thousands of bees into the hive. I tell you, I’ve never experienced anything like it before. Thousands of bees pouring out of the package, some of flying around our heads (we were spectacularly protected by our white bee suits, which allow you to be calm and quiet around the bees without worrying about a sting), others crawling around the hive box and the stand. 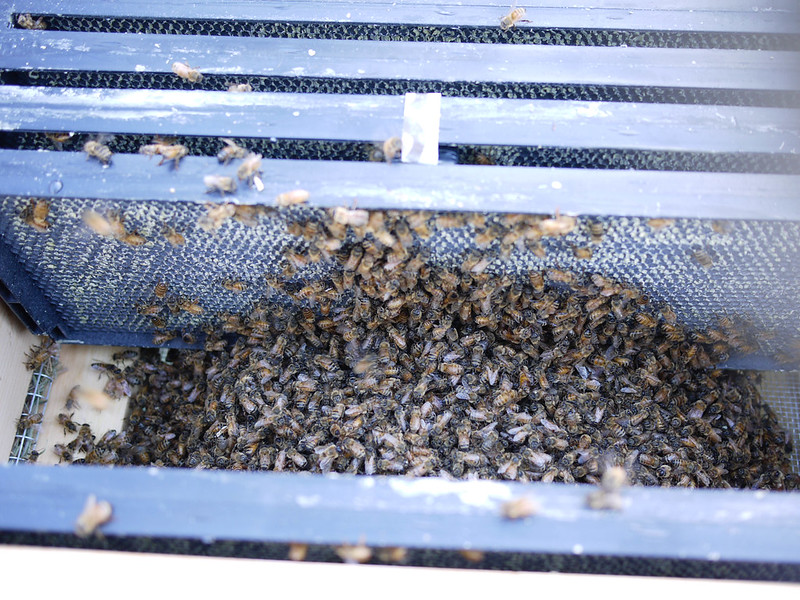 Then we carefully closed up the hive and left them alone to adjust to their new home. They tolerated us very well that first day, but we want them to be very happy and not feel that they’re going to be disturbed all the time.

We want them to want to stay.

They’re wild animals and if they feel threatened, they could just head out looking for a hollow tree trunk or some other home. So… we stare at the hive from afar, and walk past it at a respectful distance, and wonder what’s going on in there. Are they happy? Is the queen alive? Is she laying eggs? 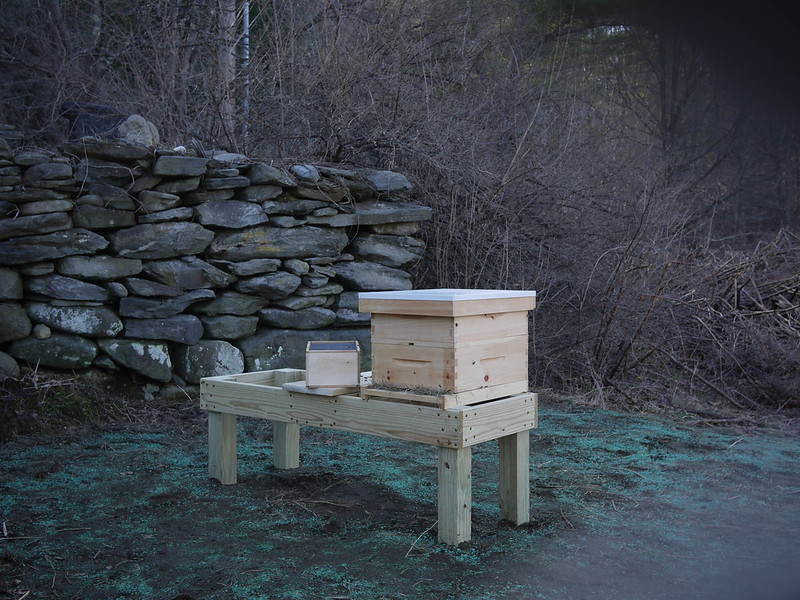 Four or five days in, we checked the hive and learned we’d made a mistake. We gave them two levels of the hive, one with the black frames and another with no frames but with an extra sugar water feeder and food. So rather than build comb on the frames, they started to build it in the empty box, on the lid of the hive, near the food (makes sense; why not do the work near the kitchen?).

That evening, we removed the extra comb and extra hive level, and put most of the bees back into the first level. Before we could return all the bees, some flew down and clustered on the legs of the hive stand. We captured and returned many of them to the hive, but it was getting dark and we missed some. We lost a few bees that night. We felt dumb and sad about that, but we’re learning to think in terms of the collective and not the individual. Like bees. 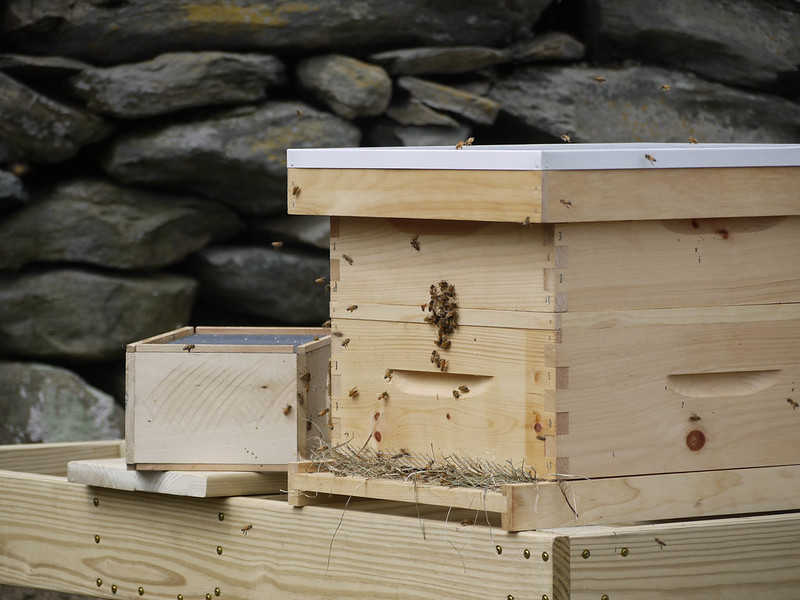 We left them for several more days to settle down from the disruption we’d caused. When we opened the hive again earlier this week, we carefully checked the frames. The bees have been busy building comb. They clung to the comb as we lifted each frame up and examined it. In many of those comb cells, we saw eggs and larvae, the beginning of the next generation of our colony.

Just this week, the lilac and apple tree buds are emerging. And on my way to H’s school yesterday I saw some type of flowering tree that was white with blossoms. Soon, if not already, the bees will be foraging, collecting nectar and pollen. And making honey.

I can see the hive from my desk. Sometimes I see a bee buzz by the window and think, “That’s one of OUR bee friends!” I think about their methodical yet rapid work (they built this beautiful comb in just days). I think about how they all pitch in together for a common purpose.

I believe I have a lot to learn from them. 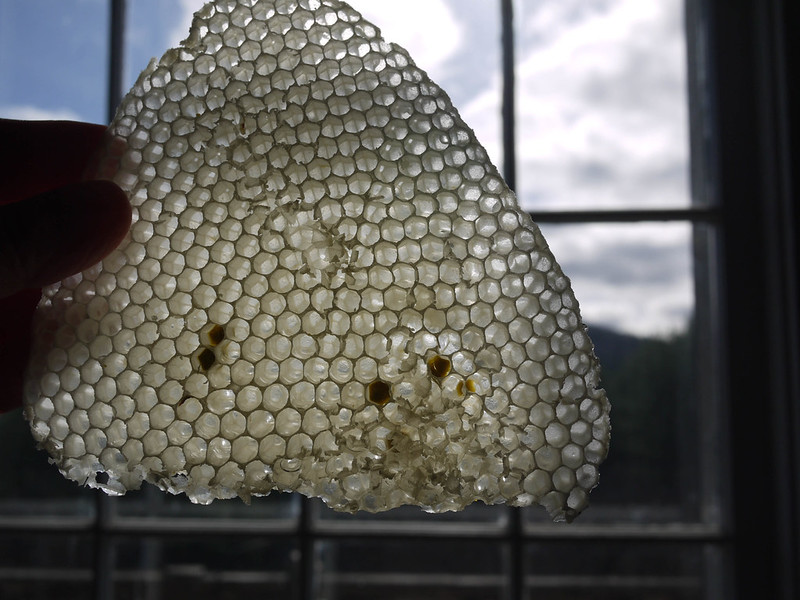