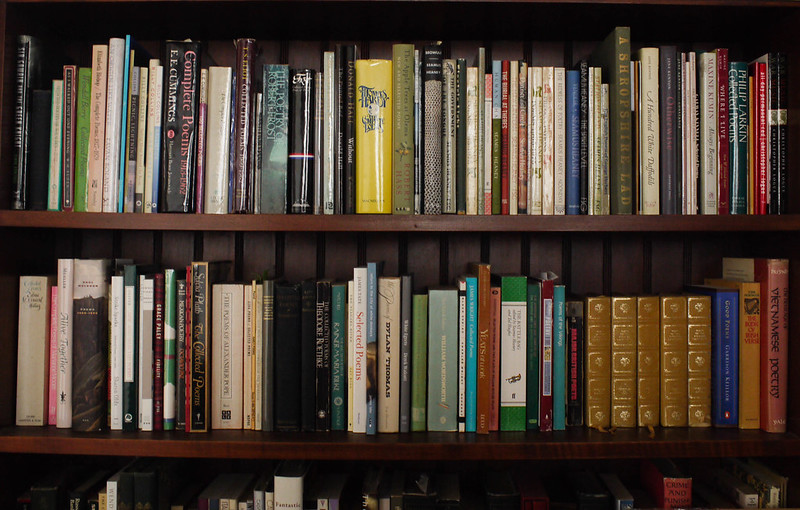 The landscape still says winter, but it’s April on my calendar and in my heart. There’s a smidge of lightening in the air, the urge to dust the cobwebs away, to air the comforters and sweep the stairs.

M and I spent time over the past week sorting through all our books. We took each one down from its shelf, decided its fate (donate, sell, or keep), then sorted the keepers into categories and reshelved them. At least temporarily, all of the poetry is in one place, filling two whole shelves. That’s a nice way to start April: knowing where the poetry is. And just in time for National Poetry Month, too.

In addition to working on my own poetry every day, I’ll celebrate as I’ve done in past years, by updating this post with a link to a new poem each day in April.

How will you celebrate? Read a poem a day. Share a poem you love in the comments here. Write a poem. Put it in your pocket. Put it in a letter. Send the words out to the world.

Love unfolded then, like crumpled petals
opening into sunlight,
unfurling at the stroke of spring

as we walked the seven miles of estuary,
reaching, after long mudflats, the beach,
the windless bay, the candle of the lighthouse,
waxen in the hazy air that hung like gauze
between us and the islands

and through an undertow of sea-mist
came the warmth of April sun
nuzzling at our dazzled, new-born skin

–from “Solway”, by Elizabeth Burns